Bones is back from its two month hiatus with something we weren’t expecting at all, but I will save the best for last.

Sweets is riding the train when he notices a young man sitting next to him, he is overjoyed with tears. Sweets asks hi 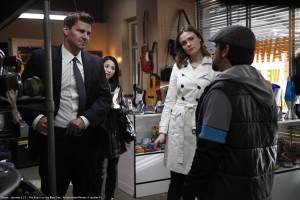 m what is going on and the young man tells him that he just found out that after 8 years he is cancer free. He is telling Sweets about all of his future plans when an earthquake strikes. The force of the earthquake knocks the young man into the pole and he dies of a massive head injury in Sweets’ arms. Poor Sweets is shaken to the core when Booth & Brennan arrive to the crime scene. Apparently, the young man who died in the earthquake is not the only victim.

The man who was killed in the tunnel was Martin Aragon. He was a ghostwriter of sorts. His most recent job was writing love letters to a transit cop. Turns out that she killed him because she found out that her ex-boyfriend was not the one writing the letters. She killed him for the man that she left. She realized that she had a good thing with him and left him for someone who couldn’t write a word of romance.

For weeks now we have been anxiously waiting to find out what steamy secret page 187 of Dr. Brennan’s book contained. Now we know. After Daisy explained to Hodgins what kind of steamy sex Kathy & Agent Andy had and that her & Sweets tried it (I think she really over shared there), curiosity got the best of him. He took a peak of the book and then quickly made his way to Angela’s office. He asks her to read the page out loud to him. She told him no and then read it to herself. I guess Angela’s been spilling some of Hodgins’ bedroom secrets. She has been helping Brennan out while she is writing her book. Brennan, realizing that she hasn’t been fair to Angela, gives her a check in the amount of 25% of her advance. From Angela’s reaction it was probably a good sized check. Note to self, become friends with a person who is a writer (just kidding).

The surprise of the night c 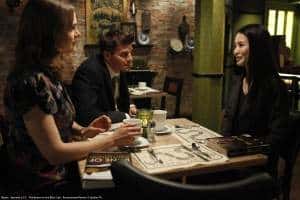 ame from Sweets. After much soul searching and a lot of sad faces from Daisy, he came to a conclusion. He wants to live life to the fullest. He is jumbling his words and doesn’t know how to begin. He tells Daisy that before his parents died, his mother left him a ring. He opens the small velvet box to reveal an engagement ring. He gets down on one knee and asks Daisy to be his wife. The aww moment of the night goes to Daisy who gets down on her knees and tells her how lucky they are the earthquake happened because she would be more than happy to have him as her husband.

I, for one, could not be happier that Bones is back. It has been a very long two months without new Bones episodes. I got to hand it to Hart Hanson and company for keeping me coming back for more. Next week is the highly anticipated 100th episode of Bones that shows us the first meeting between our two favorite characters. From watching the preview it’s gonna be one to not miss.