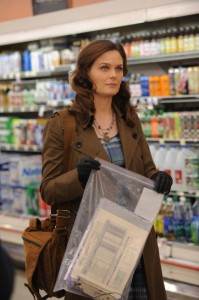 Bones finally returned from its four month hiatus with a new episode this week that ended with the birth of Brennan and Booth’s adorable baby girl. The couple investigated their last case before the birth, looking into the death of a former financial swindler who had died in prison. They learned that he had been murdered and chopped up by one of the prisoners, who later fed his pieces into the sewer pipes.

Throughout the investigation, Booth and Brennan argued about where Brennan would give birth: in a hospital or at home. That whole argument turned out to be moot, since Brennan actually went into labor in the middle of a prison riot (seriously, only Brennan would continue to gather evidence while in labor). Fortunately, she and the baby remained unharmed, since the prisoners wouldn’t hurt a pregnant lady, which led to some hilarity as she made her way through the riot itself.

The birth itself happened in a stable, which was the only place Booth could find after leaving the prison. Little Christine Angela made her way into the world, much to the delight of her parents, despite her unexpected delivery location. Later, the new family made their way home to an inpromptu party thrown by their friends and introduced their new daughter to everyone.

Bones is all new on April 9. After a short maternity leave, Brennan returns to work as she and Tina Majorino returns as Special Agent Genny Shaw, who helps the Jeffersonian team identify the remains of a of a discount shopper and “extreme couponer” who was dragged along the road by an 18-wheeler. Squintern Finn Abernathy will also be returning, and starting up a relationship with Cam’s daughter.

Watch a preview below for the April 9 episode of Bones, airing at 8:00 p.m. ET/PT on Fox. You can also browse through photos for the episode here and read spoilers from EPs Hart Hanson and Stephen Nathan about the rest of the season here.