Home
Bones
Bones Review: Can You Handle Your Chainsaw?
Prev Article Next Article 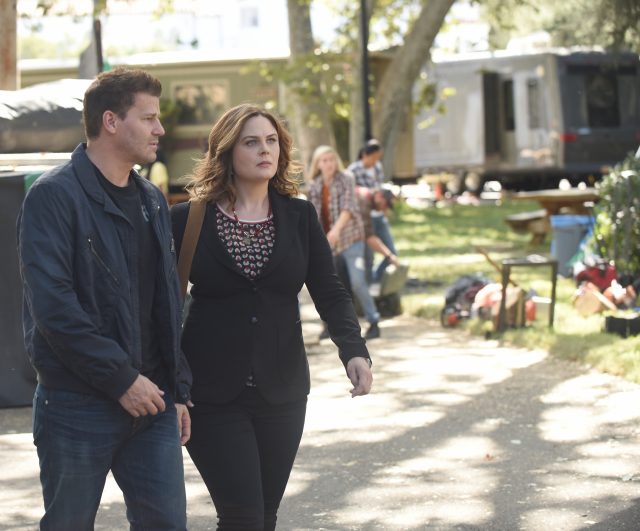 We’ve reached the halfway point of the final season of Bones. You have to take stock of how much has changed, and how much hasn’t. For example, Bones and Booth’s personal relationship has progressed greatly since the first season, given they are now married with two children. Then again, Bones still believes the best way to approach sports is through mathematical and scientific reasoning. It has its place, but that strategy is more appreciated by Christine Booth learning to ride a bike than it is by the suspects in this week’s case.

The Jeffersonian investigates the death and dismemberment of a lumberjack of all professions. Phyllis, the victim, had years of professional golf experience which made her a surprisingly strong lumberjacker. There is a whole community dedicated to the sport of cutting down trees and consuming beer and flapjacks. The latter food is a great source of enjoyment for Aubrey. I believe the word beautiful was used to describe the ingredients in the batter. Brennan’s intern for the week is Dr. Fuentes, and he has a less than fun time on an otherwise very fun case because he doesn’t get to play with the chainsaws. Booth and Brennan get to completely immerse themselves in the environment searching for Phyllis’s killer.

After striking out on a few competition rivals who didn’t care for Phyllis’ mathematical approach to lumberjacking, Booth and Brennan discover the victim was having an affair with her training partner. It always comes back to love and jealousy. The good news is that lack of conclusive evidence back at the lab gives Fuentes and Hodgins the green light to play with consumer chainsaws. Safety first when playing with sharp objects! Luckily Dr. Fuentes’s slip of the chainsaw gives the team a cause of death which leads them to their killer. It’s too bad it was the flapjack master. Aubrey would have liked to come back for more pancakes if it wasn’t for the cook killing someone to steal from her and pay off his debts.

Another callback to the first season is the running thread of Zack’s return. It was proven in the season premiere that Zack was framed for murders he didn’t commit, but that didn’t get him out of the conviction for the lobbyist murder he was institutionalized for years ago. Was Zack broken down by days of working with death? Absolutely. Did he really ever murder anyone is another story entirely. That’s exactly what Hodgins is working to disprove. It’s not that he doesn’t find evidence to help prove Zack’s innocence, but after all these years it is difficult to find conclusive evidence that would be enough to convince a judge to overturn Zack’s conviction. Yet that’s exactly what Hodgins does, only to have Cam doubt the validity of the evidence because Hodgins was Zack’s friend. That’s something I would expect from a prosecutor, not from Cam. Ouch.

Random Vote: Who thinks math and science have a legitimate place in sports?

Bones Season 12 Episode 6 Review: "The Final Chapter: The Flaw in the Saw"

Bones and Booth explore the extreme sport of lumberjacking while Hodgins tries to prove Zack’s innocence.