Home
Bones
Photos – Bones 5.14 “The Devil in the Details”

They’re billing the February 4 episode of Bones as the “Winter Finale”. This frightens me, because I think there won’t be any new episodes of Bones again until April 1, but I’m not 100% sure about that, so let me check it out and get back to you. In the meantime, why don’t you check out the promo photos and synopsis for the February 4 episode below. 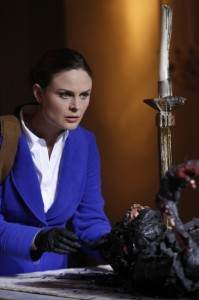 IT’S A BATTLE BETWEEN GOOD AND EVIL ON THE WINTER FINALE OF ‘BONES’THURSDAY, FEBRUARY 4, ON FOX

Brennan and Booth investigate a set of uniquely disfigured remains allegorizing biblical text. As they acquire more information about the victim, a former patient of Dr. Adam Copeland (guest star Malina) at Havenhurst Sanitarium, they are confronted with suspects who are hard to characterize as either good or evil. Meanwhile, Jeffersonian intern Arastoo Vaziri (guest star Vahdat) reveals a secret about his past in ‘The Devil in the Details’winter finale episode of BONES airing Thursday, Feb. 4 (8:00-9:00 PM ET/PT) on FOX. (BON-513) (TV-14 L)