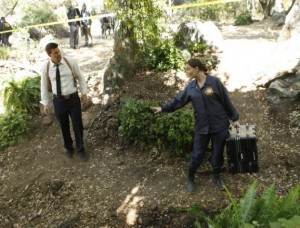 It feels like it’s been forever since Brennan announced that she was pregnant, but on November 3, fans will finally get to watch the season premiere of Bones. I’ve already watched the season premiere – and enjoyed it immensely – so I want to give all of you some teasers to help tide you over for another week. Here’s what you should expect to see in next week’s season 7 premiere of Bones:

New/old dynamic. In some respects, I feel like we missed a step here. Booth and Brennan have spent many years flirting with one another and dealing with their sexual tension. We never actually saw their first time together and then all of a sudden Brennan was announcing her pregnancy. The two of them have jumped right into sleeping in the same room, eating breakfast together in the morning, saying “I love you”, and taking naked photos of each other (well, Brennan did). It’s a huge shift in a relationship that feels like it went from 0 to 60 in about 2.5 seconds. It’s not bad, it’s just a bit to get used to at the beginning. The good news, however, is that while this duo is basically navigating a brave new world, their personalities haven’t changed.

The case is almost a metaphor about current relationships. The case of the week centers around a victim found in a paintball arena. After digging into the victim’s past, Booth and Bones realize that she suffered from amnesia and disappeared from her life and her husband for a period of time. People keep making references to the victim “starting a new life” due to her amnesia, which is essentially what Booth and Brennan are doing together.

Pregnancy is a condition, not a way of life. Brennan is hilarious as a pregnant woman. She cries randomly at crime scenes (“it’s just hormones” she shoots back when Booth asks if she’s alright) and, in the second episode, she still chases down and attacks suspects. She continues to work and is as self-sufficient as ever. According to Brennan, pregnancy is not going to stop her from living her life.

Living conditions. Like I said, just because Booth and Brennan are together, doesn’t mean their personalities have changed. This week’s dilemma arises when Booth suggests they stop crashing at each other’s apartments and find a real home together. At first Brennan doesn’t really understand the need, but when Angela explains how they’ll be a family, Brennan realizes the practicality. Of course, this means that she logically suggests they move into her place because it’s larger, but that threatens Booth’s individuality and his need to act like a “husband” and father.

The adorable Hodgins family. Bones gives us our first peek at little Baby Hodgins since last year’s birth. The baby is a little bit older and the cutest thing ever. Angela shows Brennan a home family movie of her, Hodgins and the munchkin that kept me smiling the whole way through. Then little Michael came to visit his daddy in the lab and not even the stern Cam can resist his baby giggles. I am in love with this family unit.

Sweets steps up. With Brennan more limited to crime scenes and the lab, Sweets takes a far bigger role in questioning witnesses and potential suspects, especially since the victim has a medical/psychological condition. Of course, in between spewing medical jargon, he’s still trying to counsel Booth about his and Brennan’s relationship.

The grossness continues, but is slightly tempered. This week it’s a partially decomposed, juicy body and beetles crawling around a brain. Ugh. Although, I have to admit, this is certainly not the most disgusting crime scene/autopsy we’ve ever seen on this episode.

Bones returns for its seventh season on Thursday, November 3 on Fox. Watch a trailer for the new season below.