Home
Bones
Bones Spoilers: The Baby, Becoming New Parents and What’s Next for the Season 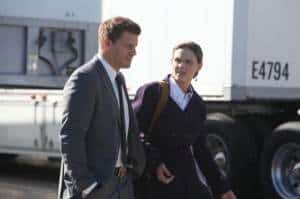 Bones returns this week with an all new episode after a four month hiatus. A move to Monday nights isn’t the only change for the rest of the season. The birth of Booth and Brennan’s baby will herald a new family and a new set of challenges as Bones winds down to its season finale in May.

A recent call with EPs Hart Hanson and Stephen Nathan revealed a few hints about what will/won’t change after the baby is born and what’s in store for the remainder of the season.

The Show’s Focus: Bones may be welcoming a new baby, but that doesn’t mean the show will fundamentally change. Nathan assured us that “there’s always been that balancing act in the show of their personal life and the cases, but we’re a murder show, so that will not change. But when we do go home, they have a new arrival, which changes their lives, so the baby will be a part of the show, because it’s a part of their lives. But somebody is still going to be murdered in a heinous and cruel way, and we will be revolted at the beginning of the show as we always have been and hopefully we’ll catch them.”

Bureaucratic Complications: Some Bones fans might be wondering whether the fact that Booth and Brennan are in a relationship – with a baby! – might become a problem for their jobs. Rest assured, the FBI and the Jeffersonian won’t be causing any problems for the duo. Hanson explained that “we’re not planning a storyline in which the FBI says you can’t be partners. We discussed it and then we thought ‘God, if we tell that story, there isn’t a single audience member who’s going to go, oh my God, I wonder if they’ll never be allowed to work together again.’ So we just decided not to do it. It may come up time to time, especially from Sweets that it’s odd to have a couple working together, but it’s not the oddest thing in the world.”

Booth & Brennan as New Parents: Brennan is going to be very surprised at the way becoming a mother will change her. She spent the first half of the season trying to get used to the hormones that came along with being pregnant and now the baby will change her in subtle ways. “We’ve always seen Brennan as a character who, because of her upbringing, was kind of afraid of life, did not want to engage with life, or had to be protected by a veneer of rationality and logic and science,” Hanson explained. Booth was the first person to really come along and challenge her view of life and relationships. “And now she has a child, and you might be able to avoid a lover as someone whose happiness, your happiness is contingent upon, but definitely not a child. So that’s what she is contending with, she is now a big open bruise because of another human being and she will find that very disorienting.”

Nathan went on to clarify that “Brennan is so objective even about herself that she is caught off guard by all these new feelings. I think that’s what’s great for us in terms of writing the show. We get to see a character who is as astonished by these new feelings and this new behavior as the audience is.” Even something as small as leaving the baby when she returns to work in the April 9 episode of Bones will affect Brennan. As for Booth, he will also have issues to deal with, including the give-and-pull of co-parenting with Brennan. “It’s like how much is she going to pay for and how much is he going to pay for? We get a lot of comedy out of it, as well as character stuff. It’s a good, fertile field for us.” The issue of who will be taking care of the baby will be addressed as well as “how is Brennan going to juggle her, being a mom [and] living with Booth, how is Booth going to juggle her and the baby and do their jobs. But they’re still doing their jobs.” 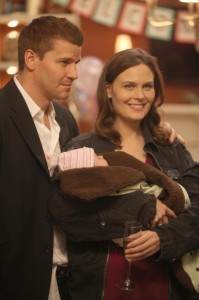 Stories that Got Lost in the Shuffle: Because this season of Bones has five fewer episodes than normal, some stories admittedly fell to the wayside. Hanson said that they likely would have explored more about Booth and Hodgins’ families if this had been a normal season. But now that Bones has already been renewed for an eighth season, there’s every reason to believe these storylines will appear next year. In fact, Nathan said that we should see more with the characters’ extended families next season.

Pelant and the Bones Season Finale: We know that this season’s big bad, Pelant, will be returning for the season finale, but Nathan warned that “he really is going to turn the series on its head for a little bit. He has much more power than any of our serial bad guys have had in the past.” Yikes!

Brennan and Angela’s Friendship: The two women will continue to bond this season, because of the fact that they’re both new mothers and because they’re genuinely good friends. We’ll see the two of them leaving the lab and playing hooky, as well as bonding over their new, similar lives. Hanson also teased that “I think in the season ender the audience will get a very good feeling for how close Angela and Brennan are. In some ways Angela knows Brennan better than Booth does in that way that another friend of the same sex can understand you more than your partner.”

Those Four Extra Episodes: Unfortunately, Hanson and Nathan mentioned that they’re still unsure what will happen to the four additional episodes that were filmed. No air date has been set for them yet. Nathan said “all we know is that we have a season ender, and that will leave us with four extra episodes that have to be able to be slotted anywhere at any time without notice.” The EP reiterated that the four episodes won’t be related to the main arc of the season. “They’re more stylized than we normally would do, and we were able to try to tackle stories that we might not normally have tackled, because we don’t know how old the baby is going to be. We don’t know what’s going to happen between relationships between people, so these really were standalone,” Nathan said.

Bones returns with all new episodes on Monday, April 2 at 8:00 p.m. ET/PT. For some sneak peeks of upcoming episodes, browse our Bones page.