Today Jodie Sweetin (formerly the middle daughter, Stephanie, on Full House) released her autobiography, unSweetined, detailing her early acting years and her subsequent drug and alcohol addiction. Only 27 years old, Jodie has lived through a lot of hard times. 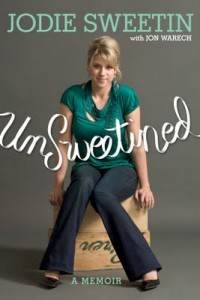 Once Danny Tanner’s bubbly daughter on America’s favorite family sitcom, Jodie Sweetin takes readers behind the scenes of Full House and shares her terrifying — and uplifting — real-life story of addiction and recovery.

Jodie Sweetin grew up in front of America, melting our hearts and making us laugh for eight years as the cherub-faced middle child on Full House. Her ups and downs seemed not so different from our own, but more than a decade after the popular television show ended, the star we knew as goody-two-shoes Stephanie Tanner publicly revealed her shocking recovery from methamphetamine addiction. Even then, Jodie still kept a painful secret — one that could not be solved in thirty minutes with a hug, a stern talking-to, or a bowl of ice cream around the family table. The harrowing battle she swore she had won was really just beginning.

In her deeply personal, utterly raw, and ultimately inspiring memoir, Jodie comes clean about the double life she led — the crippling identity crisis that began at her birth, the hidden anguish of juggling a regular childhood with her Hollywood life, and the vicious cycle of abuse and recovery that led to a relapse even as she wrote this book. Jodie traveled the country speaking to college kids about her triumph over substance abuse, yet she partied nightly, spending tens of thousands of dollars on her habit. Her addiction tore her family apart and alienated her from her former Full House cast mates until becoming a mother gave her the determination and the courage to get sober.

Today, Jodie’s life is a work in progress. Resilient, charming, and funny, she writes candidly about taking each day at a time. Hers is not a story of success or defeat, but of facing your demons, finding yourself, and telling the whole truth — unSweetined.

If you’re looking for a tell-all about Full House, you’ll need to look elsewhere. Jodie details how she landed the role of Stephanie Tanner when she was very young, as well as the experience of filming the pilot episode. She also spends a few chapters briefly discussing her relationships with the other cast members and how most of them remained friends over the year. Unlike with some other shows, the actors from Full House were obviously very close and a pseudo-family. At least 2/3 of the book, however, is devoted to what happened to Jodie after the show ended and her drug and alcohol addiction.

I think that Jodie accurately describes some of the reasons why so many young stars eventually turn to drugs and alcohol, particularly those who are “one-hit wonders” (though I do hope that she can continue to develop her career). It must be difficult to play a role through most of your formative years and then struggle to develop your identity when the cameras stop rolling. In Jodie’s case, her family history and too much money (at least until she blew through a lot of it) obviously contributed as well. I gathered that her parents did their very best to nurture and help her throughout her career and into adulthood, so I don’t necessarily believe that they are contributing factors to her addiction like so many other absentee or “yes” parents (see: Lindsey Lohan).

There are a few interesting revelations in the book. One I won’t spoil for you, and we all know that she continued to abuse drugs and alcohol while giving sobriety speeches because it’s been plastered all over the news. The thing that (hilariously) caught my eye was that Alanis Morissette wrote “You Oughta Know” about Dave Coulier (Uncle Joey on Full House). That totally blew my mind and was a piece of trivia I didn’t know. I’ll never look at Dave the same way again.

The book is a very easy read and I got through it quickly. But something kept nagging at me while I was reading it. I got the impression that Jodie was strangely detached from her tales of drug use and the horrible experiences that she so obviously went through. She repeatedly writes about sobbing through confessions of her relapses and her feelings of disappointment and inadequacy. But for all of the tears that she must have shed, there’s still a strange sense of detachment. I can’t really explain my feeling accurately.

I am in no way insinuating that Jodie did not go through hell or that she disregards her past drug use as non-serious, I’m merely stating my own opinion that it seems like she was detached from her own past. Perhaps this is a coping mechanism, or perhaps she simply didn’t want to write a “poor little rich girl” book. When she writes about her daughter (and includes a letter to her daughter at the end of the book) you feel more emotion in those words.

It’s obvious that Jodie loves her daughter, Zoie, and that she was the catalyst for Jodie’s sobriety (although Jodie does admit that she did relapse with alcohol after her daughter’s birth). Whatever happens, I still remember that little girl from Full House and hope that Jodie can get her life on track and keep it that way. Overall, this book is the story of an insecure former child star who got very side-tracked for a very long time. It might sound formulaic, but it’s not. It’s a sad story, but ultimately an uplifting one. Having never had an addiction I cannot imagine how much of a struggle Jodie’s life must have been. I hope, going forward, that it will be less so.