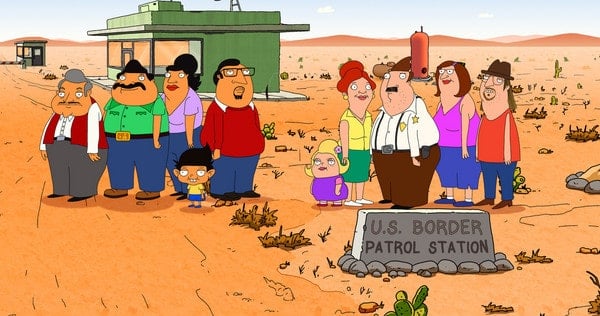 What is the point of Bordertown? I must ask, because after suffering through three episodes to make it to last night’s “High School Football”, I’m hard-pressed to think of a television show more utterly pointless and willfully offensive as FOX’s latest “comedy” from Seth McFarlane’s Family Guy team. From beginning to end, “High School Football” begs the question of why this show even exists on television in 2016: as unfunny as it is predictable, “High School Football” never really establishes a point to all of its nonsense, littering a cliche-ridden story about the main character illegally adopting an immigrant to win a preseason football game for Mexifornia, the town all the “fun” takes place in.

Yup, that’s the whole story: and on a script from Buffy and Daria vet Dan Vebber, I really had much higher hopes for Bordertown‘s fourth episodes, even though nothing I saw in the first three suggested any promise. There are occasional moments where Bordertown feels like it is reaching for something in its stories, but those moments are instantly forgotten against the lifeless spatter of cutaway jokes and cracks about fat Americans; when Bud yells at his neighbor (and soon-to-be brother-in-law) about why he wants his son to play football instead of soccer, he asks “How’s a 16-year old supposed to get Alzheimer’s?” That kind of low-brow humor at least offers something of some cultural cache to attach a satirical critique of American-isms to; the rest of “High School Football” does no such thing, or makes any such effort to be clever, or even mildly satirical.

Instead, we get a series of jokes that aim to be mildly offensive to get attention: just the jokes alone it makes about women to pander to the lowest common denominator is depressing. There’s jokes about domestic violence (multiple), women being murdered by their husbands (multiple), fat daughters, married women who fawn over minorities, stripper moms – and then it shifts to race, and things just get even more unpleasant. It makes for a painful watching experience, with nothing of substance to hold onto.

Bordertown even forgets the simplest trait of every animated family comedy it is piggybacking (very poorly) off; Bordertown has to like its protagonist, even if the rest of us hate him. There’s got to be a reason he’s a watchable, enjoyable human being: early on, Peter Griffin’s willingness to do anything to protect his family and their New England-ness made him a lovable, if thoroughly mindless and regressive, presence (until later seasons just turned him into a xenophobic idiot who hates everything, of course). Bud has no such qualities, and “High School Football” does him no favors, turning him into a literal felon while he parades around a Mexican teenager as his “new friend”, even though he makes no attempt to understand him in any way, shape or form.

Doesn’t that sound like fun? Throw on top some of the most stagnant, lazy animation I’ve seen from a FOX show, and there isn’t anything about Bordertown that suggest its worth investing in. And that’s disappointing: as The Simpsons continues to wane in quality, and Bob’s Burgers seemingly only airs one episode a month throughout the year, FOX’s animated line-up could use a fresh injection of energy and creativity. Unfortunately, returning to the consistently shallow waters of Seth McFarlane’s comedy team isn’t the answer: Bordertown is passive, unfunny, thoroughly trite television, a show without any redeeming factor whatsoever, save for the economic impact it has in keeping people employed (and even then, couldn’t FOX be putting their time to better use somewhere else?).