Home
The Borgias
The Borgias Review: Four Reasons You Should be Watching & a Character Guide

On April 3, The Borgias will be premiering on Showtime in the United States and on Bravo in Canada. Neil Jordan, the Oscar winning writer of The Crying Game, is the showrunner of this new historical drama.

The Borgias focuses on the Spanish family headed by Rodrigo Borgia in 15th century Italy. Rodrigo worked his way up the political ladder of the Roman Catholic Church to become Pope Alexander VI. Four of his children are featured in the show: sons Cesare, Juan, and Joffre and daughter Lucrezia. Rodrigo isn’t married, but his long-time mistress Vanozza is the mother of his children. Unfortunately, when he finally manages to get himself elected Pope, he tells Vanozza he can no longer share her bed, although this doesn’t stop him from taking on a new, younger mistress named Guilia Farnese.

The family schemes and plots to acquire and hang on to their riches and power, and isn’t above using bribery and even murder to accomplish their goals. I screened the two hour premiere and the second episode of this new series. The two-hour premiere features the death of the previous Pope and the conclave where Rodrigo is elected Pope by having his son Cesare bribe his fellow Cardinals, much to the displeasure of his rivals, particular Cardinal Della Rovere (played by Colm Feore). After being elected Pope, Rodrigo is immediately thrust into plots to defend his new titles from his enemies, while balancing his family and his new mistress. Here’s four reasons why you should be watching this new show on April 3:

(1) The Costumes and Sets

The Borgias is a veritable feast for the eyes, with absolutely gorgeous costumes and scenery. The sets and outfits worn by the characters are opulent and beautiful and bring a richness to the overall series.

(2) The Scandals and the Mysteries

Of the many devious families and characters sprinkled throughout history, The Borgia family was an excellent choice for a television show. Even if the show is not 100% historically accurate, it makes for salacious television. The family members scheme their way to the top of the power chain, poison their enemies, engage in affairs, and hide their treachery behind their “service to God”. Nothing about this family is ever boring.

(3) Jeremy Irons, Colm Feore and the Rest of the Cast

Jeremy Irons plays a devious Pope who is, in turns, bored with his enemies and humorous. Colm Feore is an angry Cardinal who is scheming to take down the new Pope. Francois Arnaud is exceptionally good as Cesare Borgia, and is heavily featured in the first two episodes of the show. This show boasts a stellar cast who are excellent at playing devious characters.

The Borgias is not an exact replica of The Tudors, but if you were a fan of the previous show focusing on the reign of Henry VIII, then you should be interested in The Borgias. While The Tudors focused more on politics, The Borgias focuses more on religion. But both shows carry similar themes – scheming by people in power, historical storytelling, sex, opulence and scandal – and if you’ve been missing a historical drama since The Tudors ended, then this new show is the one for you.

Below we have a handy character gallery with the main characters for the series, along with a short bio for each of them. You can also view a three and a half minute trailer for the series that we previously posted by clicking here. 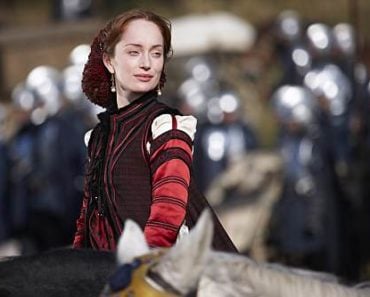