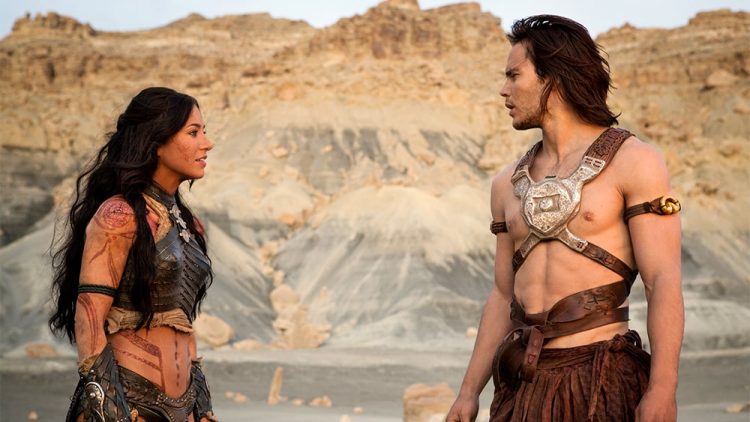 How do you bring back a box office flop that was never a hit to begin with? You make it into a running series since it appears that the plan now is to bring John Carter (folks still remember this Disney gaffe right?) back to prominence by placing it on Disney+, the streaming network that people are already enjoying, and making it run for multiple episodes instead of one long train wreck. The cynicism might not be appreciated, but as of now it’s enough to wonder if their continued success is starting to go to the heads of the Disney elite since John Carter was one of their rare misfires that didn’t really add all that much to the Disney line. Some people liked it, a lot of others couldn’t stand it, so hey, bring it back to the mix and let’s see if we can redo it, right? Well, according to Evan Lewis of We Got This Covered the only real details that are known is that the plan to bring this to the network is apparently scheduled for 2022, so there’s enough time to see if it can pan out and things can be worked out in a way that will make the box office bomb actually sing a bit so that it can become appealing enough to get people excited.

It’s hard to say just why John Carter never took off since some people still sing the movie’s praises today and others have to be reminded that it even exists. Disney has made some whoppers in the past and they’ve also made a few mistakes that they’d likely want to take back. But something about this story didn’t really track for a lot of people and left way more questions than answers when all was said and done. This is true for a lot of movies obviously but with John Carter it was almost as though the movie just showed up and then was gone as though it had never been given a real chance to develop into something. As far as Taylor Kitsch goes, being the lead of a movie that doesn’t go anywhere is unfortunately something he knows how to do and is thrust into more than he might might like. He’s been in a few interesting movies such as Battleship, Lone Survivor, Savages, even the ill-fated The Covenant, but it’s almost as though Hollywood doesn’t know what to do with him despite the fact that he has a lot of potential and can play a character from start to finish. Ricky Miller of Control Forever seems to agree in his own words. If not for his mishandling it’s possible he could be someone that people would be talking about over and over, but at this point he’s being made into the kind of actor that people can recognize but still isn’t seen as fully respectable simply because he’s not being given the material he needs to really shine.

Maybe John Carter will shine as a series, just maybe. There’s a strong case for movies that don’t go that far on their own when they finally get picked up and turned into something else, but it’s not ironclad and it’s not bound to be a hit overnight unless Disney can find a way to make the story pop in a big way. The chances of bringing back any of the original actors from the movie does feel as though it might be a good idea, but it might not happen. Without any concrete details at the moment it’s hard to say if it’s even something that Disney is thinking about, but there’s always the off chance that they might do something that makes sense to the fans as well as to those making the decisions. At this time it’s simply too far out to really say much that might stick, especially since taking on the project of John Carter means that whoever pulls the short straw is going to have one monumental task on their hands. The sad part is that said director and writers wouldn’t even have to contend with creating a series from a movie that no one liked, they’ll have to contend with a movie that few people remember at this point. Ask any ten people on the street and a couple of them at best might state that they remember this movie, and if you’re lucky one of them might even claim to have liked it.

There are just too many questions with John Carter and not enough answers given throughout the movie. Questions are usually a good thing since by the end the average viewer either has the answers they were looking for or they’ve come up with their own answers and are able to move on with the idea. But after John Carter a lot of people were just confused. The series has a lot of work to do if it wants to improve on this.