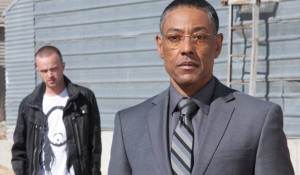 Even though Gale’s body has long since gone cold on Breaking Bad, his death is still affecting characters and plot-lines on the series in a major way. Too often on a crime drama, which this series has definitely become in these last two seasons especially, the act of murder carries only consequences on the law enforcement side of things. Exploring all of the ways the taking of a life changes the norm in terms of interpersonal relationships and conflicts is one of the ways this series is looking to reinvent what you think you should expect from this type of show.

It can’t be said enough how much the core relationship of this show, that of Jesse and Walt, has changed after Jesse killed Gale. Even though the show has truly expanded to let so many other ancillary characters into the main plot of Walt’s Meth business, the choices that Jesse and Walt make with each other and against each other are still carrying the largest of consequences. Gus was wise to not merely drive a wedge between them by letting Jesse take on some extra responsibility within his operation; he also sought to build Jesse up. For anyone who’s watched this show since day one, the constant berating of Jesse by Walt has been a mainstay and there’s a disturbing sort of empowerment in what’s going on in Jesse’s life now that Mike and Gus have taken an interest in his potential.

But what’s bad for Walt is that he’s still trying to treat Jesse the way he always has. Coming up to him and whispering about conspiracies to poison Gus, Tuco-style, the first chance he gets as he tries to make Jesse feel as if they’re still on the same side. Bringing up how he should want Gus dead himself after his former girlfriend Teresa’s brother died as a result of a choice Gus made. Stand-out character of the season Mike had it pegged when he told Jesse that what Gus likely sees in him is his sense of loyalty even if it’s to the wrong man. So when the perfect opportunity presented itself for Jesse to reinvest himself in Team Walt, he chose not to poison Gus. It wasn’t out of cowardice so much as he stopped to realize that this was now his choice to make. I think Jesse has started to finally realize that he can make his own choices away from what Walt wants and things may just come out better for him in the end. And if they don’t, well at least it was his choice that put him wherever he winds up–Jesse may have pulled the trigger on Gale but it was not his idea to do so after all.

Having this atypical support system has Jesse clean and sober and he even attends one of his old addiction therapy group meetings. Resulting in a scene so raw and so brutally honest you’d think Aaron Paul was bucking for an Emmy next year if he didn’t already have one. The way he confronts and twists standard therapy notions of accepting one’s own actions no matter how horrible they may be was a harrowing scene of a man embracing self-loathing as the only form of acceptance he’ll ever have for what he’s done.

What was brilliant about that scene were the interjections made by various group members during his pseudo-confession to killing Gale. It all begs the question of when is an awful act considered necessary and when is it just pure evil? If the dog were sick then it would have been a kindness to put it out of its misery, so the act of killing is considered mercy. There’s no question that killing Gale was a cold-blooded act, but in that moment on that night between Walter and Jesse it was the only option they had. There was no other choice to them, so in the heat of the moment a ‘˜problem dog’was put down. And now that Hank has made some seriously strong and clear-headed police-work turn into a real lead for the DEA to start taking a closer look at Gus Fring, it makes one wonder how far this show will push Walter White’s choices. Personally I wouldn’t be surprised if the closer Hank gets to figuring everything out, the closer Walt gets to deciding that Hank’s life is a liability just like Gale’s was.

As much as it’s started to feel like the show is moving toward some endgame by having Hank even on this path of exposure in the first place, there’s no rule anywhere that states if Heisenberg goes down then Walt is finished. In fact it’s starting to look as though the cartels in Mexico will take care of Walt’s Gus problem themselves if relations between them and Gus remain as strained as they are now. All Hank needs to do is believe that Gus was Heisenberg and Walter needs to learn to keep his mouth shut about needing the credit for what he’s done in order for the show to continue. But who knows? Maybe part of the endgame will be showing the consequences of Walt’s crimes and we’ll see him go through the legal system and eventually wind up in a penitentiary before the show is done. With each new piece falling into place one can get the sense that Vince Gilligan and his team know exactly where they’re taking us as an audience even if it’s not to the usual TV destinations.