Consider the beginning of this review an open letter of sorts to Walter White regarding his chances against coming out on top in his war between himself and his employer, Gustavo Fring. I understand that you’ve had quite a lot to deal with this past year what with your relationship with Jesse Pinkman falling into bloody violence last week, your worries about keeping your wife and son away from the dangerous people you work for, as well as constant concern for your own state of health. You spent the majority of your scenes in this episode in a state of drugged-up convalescence and it is understandable that you’d need to take some time for yourself to regroup and figure out where it all went wrong.

Certainly pushing your partner to be so isolated away from you that he’d start to find value, as the audience has as well, in being on Gus’s side didn’t help you in any way. But allow me to say that as things currently stand–you’re not going to beat Gus. At least that’s the thought that went through my mind as the entire upper level members of the big bad Mexican cartel of Don Eladio fell to their knees gasping for breath after a particularly deadly tangle with toxic tequila.

I mean seriously Walt, Gus is willing to poison himself to take out his enemies. You have never gone up against someone like him before. Unless you come back from your simultaneously bruised ego and body better than ever, or at least luckier than ever, you won’t win. At this point, your best option is showing up for work in the lab with the hope that you can keep from Gus exacting revenge on you for even trying to go against him. 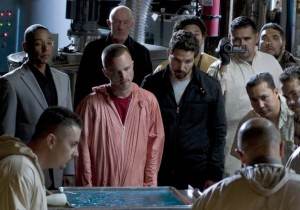 Sincerely, the person who just watched Gus walk into Mexico and solve his cartel problem, get revenge on the man who ordered the death of his first cook, and be more supportive of Jesse’s capabilities in one hour of TV than you have in nearly four whole years.

That all being said, Walt did have a fantastic scene at home with Walt Jr, who is currently just about the only person left who is totally separate from all of the shady dealings on this show. Cranston brought tears to my eyes with his line reading about how Walt truly last remembers his deceased father. I also really liked Jr.’s reaction about which Walt he’d rather remember when everything is said and done. I completely agreed with him that seeing the raw emotion of a Walt who admits to making mistakes and gets emotional about his failures was refreshing after weeks of stern stubborn Heisenberg posturing. Let’s be honest, things haven’t at all gone well for Walt this year so it was about damn time he came to realize what his bad decisions have brought him. It’s very telling that he’s only capable of doing so when he’s under the influence–typically of alcohol since he is so guarded with everyone now for the sake of maintaining an image of strength. And saying ‘Jesse’ before he passed out again following a tear-filled apology? You can be as sorry as you want to be Walt but I doubt that Jesse would even believe it at this point.

Skylar White was busy trying to keep Ted Beneke’s financial problems from being everyone’s problem as she enlisted Saul to try to fix it. Exchanging money between friends or former co-workers never ends well, and I hope I wasn’t the only one who knew that Ted would take the money that could have bailed him out from IRS woes and use it in a completely irresponsible way. My respect for Skylar is going up by the week with how she’s handling her business in this storyline, especially when she straight-up told Ted where that money really came from. It’s really interesting to think that at this point Walt’s entire world can come crashing down and he doesn’t even have to leave his bed for it to happen. Ted’s becoming an outside of the drug fold problem that is just as bad as the possibility of Hank catching another break in the Gale Boetticher case–it’s a testament to strong writing that characters and threads from past seasons can find ways to affect everything in a positive or negative way later on. 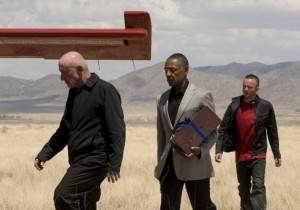 Meanwhile, as promised Jesse, Mike, and Gus traveled down to Mexico so they could inform the lab techs down there on how to create the blue meth. It was so much more than just ‘the student has become the teacher’ as Jesse successfully cooked his own batch of blue that was nearly as perfect as Walt’s own batches are known to be. Seeing him take charge, show confidence, and yes have tangible guilt for saying Walt’s words in addition to using the man’s original recipe was a great way of showing the audience how much Jesse has grown in this last season especially. Aaron Paul continues to shine with the darker material he’s been given this season as Jesse Pinkman finally becomes a man in the eyes of the Breaking Bad world and this is in no small part due to the support he’s gotten from both Mike and Gus. When Gus told Jesse he could do this on the plane down to Mexico–it’s much more believable as a statement than when Walt would say it in the past.

Typically Walt would only ever encourage Jesse that he could do something difficult when their lives were on the line and his success was the only thing keeping them both alive. So, of course he would want Jesse to feel encouraged in that moment. But Gus says it in a way that, even though it’s going to be dangerous in Mexico and much rides on Jesse not messing up in front of the cartel, it’s clear that he genuinely believes in Jesse’s capability to succeed. He wouldn’t have allowed Jesse to be in the situation where the results of his actions matter so greatly if he didn’t. And as we saw, Jesse having a good cook was merely the means to the end of Gus’ gift of poisoned tequila which was the real problem-solver. 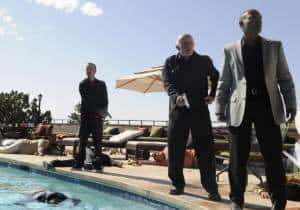 From the moment Gus stared down into the swimming pool from his back-story flashback there was this feeling of mortal dread for the next ten minutes or so. For one thing, swimming pools tend to equal some form of death on this show. First there was the eerie series of cold opens that turned out to equal the fallout from the plane collision that happened at the end of the season. Then Gustavo’s first partner was murdered poolside and now Don Eladio’s body floats in that very same pool. In fact, this show needs to be given credit for doing some very interesting things with their cold open sequences. In this season there was an opening that showed Jesse playing a first-person shooter video game called Rage. He spent the entirety of the scene firing away without a hint of remorse even as images of Gale’s very real face flashed in his mind while he shot at the screen. And that would sure enough be a hint that when needed, Jesse can now pick up a gun and defend himself and others even if that includes killing someone. 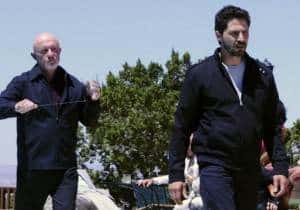 If the show has flirted with the idea of Jesse firmly being a member of Gus’ ranks for the last handful of episodes, then it has definitely committed to the reality of Jesse being with them now as he drove them all off to seek the medical attention a wounded Mike and still-poisoned Gus desperately need. Mike probably had the line of the episode as he explained to Jesse who worried openly that they would really leave him in Mexico to cook for the cartel, “I promise you this. Either we’re all going home, or none of us are.” The trio all looked out for each other in different ways as Gus even risked his own neck to prevent Jesse from drinking poison even when it was the only exit strategy they had. But in solving their cartel problem, Gus very well may have wound up signing his own death warrant by ingesting the poison himself.

Honestly, I don’t know what’s going to happen next, but the previews showed Walt getting back into the game so to speak. Jesse is a more dangerous adversary to have now than ever before if he manages to cross the border again all in one piece. He holds the lives of men that he once wanted to see dead in his hands now, and the show could still toy with Jesse making the choice of what the fates of Mike and Gus will be. The possibilities of how this season will end have only managed to grow as the finale gets closer. If anyone stands near a swimming pool though I’m going to make a guess that they may not live to see another day at this point.