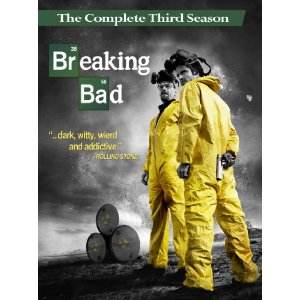 Season three of AMC’s hit show Breaking Bad was an incredible white-knuckle ride, and it’s felt like an eternity waiting for season four to air. The wait has only seemed longer because the DVD of season three still hasn’t hit the shelves. Great news: a release date has been finally announced! The great date is June 7. (Season four hits AMC a month and a half later on July 17.) That’s right, just two more months before we can relive season three in preparation for season four.

You can read my review of the brilliant season three finale, get your pre-orders in on Amazon now (DVD, Blu-Ray) and then check out all the details below!

Viewers can relive the darkest and most dangerous season yet when Sony Pictures Home Entertainment brings Breaking Bad: The Complete Third Season to Blu-rayTM and DVD on June 7th — just prior to the start of the show’s fourth season. The critically acclaimed AMC series stars Bryan Cranston, winner of three Best Actor EmmysÂ® for his role as Walter White, chemistry teacher turned drug dealer and Aaron Paul (TV’s “Big Love”), Emmy winner (Best Supporting Actor) for his portrayal as Walter’s partner-in-crime, Jesse Pinkman. Breaking Bad also stars Anna Gunn (TV’s “Deadwood”), Dean Norris (Terminator 2: Judgment Day), Betsy Brandt (TV’s “Back When We Were Grownups”), and RJ Mitte. All 13 episodes will be included on both Blu-ray and DVD. The third season release is packed with special features including deleted scenes, outtakes, cast & crew commentary on nine episodes, five all-new behind-the-scenes featurettes, 20 episodes of Inside Breaking Bad and much more! Breaking Bad: The Complete Third Season DVD will be available for $39.95 SRP, while the Blu-ray release will sell for $49.95 SRP.

Created by writer/director/producer Vince Gilligan (TV’s “The X-Files”), who also serves as executive producer with Academy AwardÂ® winner Mark Johnson (Rain Man, 1988 Best Picture), Breaking Bad follows the story of Walter White (Cranston), a high school chemistry teacher who discovers he is dying of lung cancer. Desperate to pay for his cancer treatments and to secure his family’s financial security, Walt discovers a new sense of fearlessness. He teams with former student, now drug dealer Jesse Pinkman (Paul) to use his scientific knowledge for financial gain, but soon finds he’s trapped in a sinister world of drugs and crime. Breaking Bad will return for its fourth season on July 17th.

Winner of two 2010 Emmy Awards, including Outstanding Lead Actor in a Drama Series for Bryan Cranston and Outstanding Supporting Actor in a Drama Series for Aaron Paul, Breaking Bad: The Complete Third Season returns, hailed by the Los Angeles Times as “the best show on television.” Even though his cancer’s in remission, chemistry teacher-turned-meth maker Walter White (Cranston) still can’t catch a break. His wife (Anna Gunn) has filed for divorce, his DEA agent brother-in-law (Dean Norris) is out to bust him and a Mexican cartel just wants him dead. But with his family’s future still at stake Walt cooks up a deal that will make him a fortune; a scheme with a terrible price.

Exclusive to the Blu-ray:

Breaking Bad: The Complete Third Season is not rated. The Blu-ray and DVD have a run time of approximately 613 minutes.