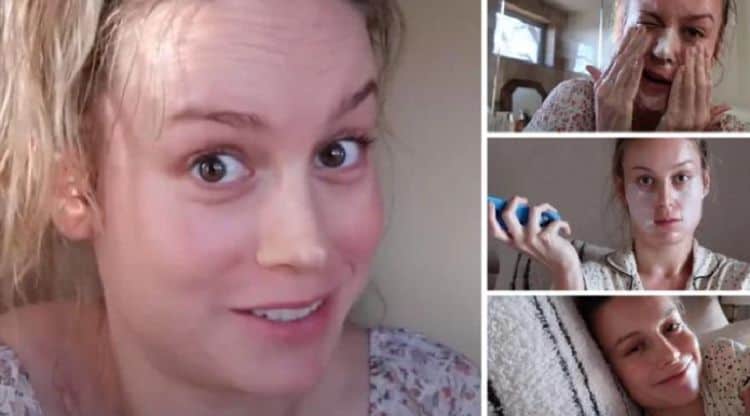 There’s got to be a reason why Brie Larson is sharing her nighttime routine and I’ll be dipped if I know why, but as anyone could probably guess, a lot of people are interested in it for some reason. People are going to watch what they want to watch obviously and it’s not going to stop since when folks like Brie put something online there are going to be fans rushing to their computers or phones to see what’s there. Listening to her for a while though it’s pretty obvious that her time at work, though far different from a lot of us, isn’t any more or less stressful since she has a lot to deal with, a lot of us have a lot to deal with, MOST people have a lot to deal with, and we all have our own routines to keep from stressing out too much and to wind down when we need to. Posting it online is a personal thing and not something to really get bent out of shape about so if anyone was looking for any dirt to be spread right now that’s not going to happen. There’s simply no need at this moment since it’s all about relaxing and just chilling into the evening hours after a long day at work. Those that are still out working at regular jobs get this just as much as anyone if not more so since the stress that comes with a job that’s away from home, a comfort zone for many people, is something that can contribute to a very hard and trying day. Like it or not though, those of us that work from home are also stressed at times since there’s a lot to do every day and not enough time to do it sometimes. It’s easy to think that Brie might have someone taking care of the housework for her but hey, if you have the money it’s definitely worth it, especially since a clean home helps to keep one’s peace of mind intact more often than not.

If there’s anything to say about Brie right now it’s that the hope is that as she continues her time with the MCU that she’ll have been accepted a little more and yes, have tempered her attitude when it comes to the fact that white, adolescent males are going to report on the MCU, Captain Marvel, and anything and everything else to do with the franchise just as much if not more than anyone. The thing about the MCU fanbase is that it’s far more diverse than people think, but folks need to speak up if they want to be heard. There is a bit of toxicity to the fanbase, there’s no doubt about that, and while Captain Marvel was definitely attacked in a number of ways it’s easy to say that it was a good action movie, but it was also given a little more hype than was needed. How Brie has taken this and what she’ll be like when returning to the role is hard to say since it’s been a little while. But what can be said is that Captain Marvel has been established as a working character and she has contributed quite a bit during her short in the MCU at this time. There’s no denying that she’s a powerhouse, but again, it’s a hope that she’ll continue to be important and yet not placed on a pedestal when she still has more to prove, just like the rest of the cast.

Brie Larson has been a favorite for a while now and it’s easy to assume that people will back her no matter what she does or says at this point. Some folks will continue to condemn her for one reason or another, and some will ignore her entirely, but sometimes it does feel better to list her accomplishments, of which she has plenty, and still remain balanced enough to say that she has put her foot in her mouth with some of the comments she made. The fact that she came blazing into the MCU was enough to excite some folks and frustrate others, but since her character has been useful and definitely needed, stating that she’s a valued individual in the franchise is pretty easy. If not for her stint in the MCU it’s hard to say that, even with an Oscar, that she would be this popular and would be talking to people about her wake-up and nighttime routines online, since folks might wonder why they need to care. As of a couple of years ago, however, people have been racing to see whatever it is she has to say and have been willing to sit and listen even if she’s just talking and not really giving advice.