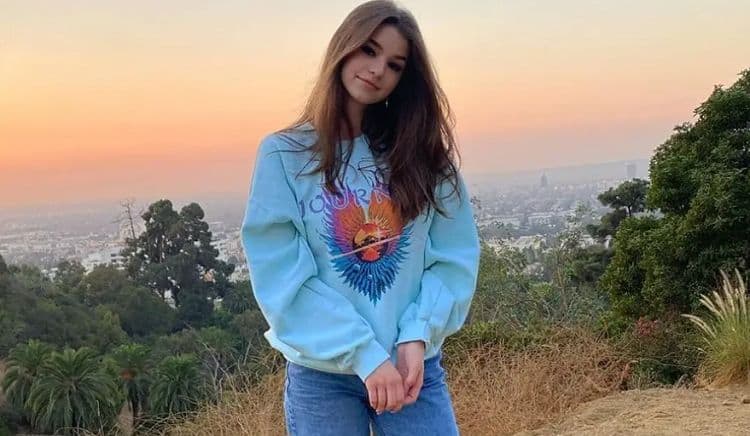 If there’s one thing most of us know about the internet, it’s that once you put something out there it never goes away. Unfortunately for TikToker Brooke Monk, the realities of that fact recently hit her like a ton of bricks. In an old TikTok comment, Brooke suggested that she was a Trump supporter and many of her followers weren’t feeling that. She has since apologized, but some people have already written her off. Luckily for her, this incident probably won’t result in her being canceled, but it will serve as a reminder that you always need to be careful about what you post. What’s ironic about this particular situation though, is that she isn’t even old enough to vote. Keep reading for 10 things you didn’t know about Brooke Monk.

1. She Works With An Agency

Brooke doesn’t just have a big social media following, she has a massive one. On TikTok alone, she has more than 11 million followers. With numbers like that, social media becomes much less of a hobby and much more of a business. For that reason, Brooke has chosen to work with an agency called The Fuel Injector.

Okay, so she hasn’t officially announced this yet, but all signs are pointing to to Brooke and fellow influencer, Sam Dezz being an item. The two have been posting a lot of content together lately and they have undeniable chemistry. Both of their fans are eagerly waiting for them to spill the beans.

3. She Is A YouTuber

TikTok is a great platform, but it only allows for shorter clip style videos. In order to give her followers longer videos, she started a YouTube channel in 2019. Although she has only uploaded a handful of times, she has 349,000 subscribers and more than 3.5 million views.

4. She Was Home Schooled

Even before becoming popular on social media, Brooke’s life was different from lots of other kids her age. She was home schooled for her entire life. She never explained why her parents made that choice but it may have something to do with religious views. While being home schooled definitely has its cons, one of the pros is that it gave her the opportunity to finish high school early.

5. She Comes From A Very Conservative Background

Brooke is a devout Christian and this is something that she has never been shy about. As a result, she was raised with a lot of conservative view which contributed to her initial support of president Trump. In her apology, however, she explained that she no longer holds many of these views.

6. She Started A Merch Line

Starting merchandise lines has become a popular way for social media influencers to build their brands and create a sense of community among their followers. Brooke began releasing merch at the beginning of 2020, but she has since removed the link from her Instagram bio.

What’s most impressive about Brooke having nearly 12 million followers on TikTok is the fact that she’s only been on the platform for about a year. In a video on her YouTube channel, she shared that she didn’t even get on TikTok until October of 2019. To gain so many followers in such a short amount of time is extremely impressive. If she continues to grow at the pace she’s been going, she’ll have nearly 30 million followers by this time next year.

8. She Is The Middle Child

Like lots of other TikTok influencers, Brooke doesn’t really share much information about her personal life. She seems to prefer to keep her real life and her online persona separated, and it makes sense why she would want to do that. What we do know, however, is that she has has four sisters and is the middle child.

9. She Loves To Experiment With Makeup

Brooke is a very creative person and makeup has become one of her favorite ways to express herself. In addition to doing more traditional looks, she also enjoys experimenting with different colors, styles, and even designs. After getting countless requests, she decided to create a tutorial of her typical makeup look.

TikTok isn’t the only place where Brooke has built an impressive following. She also has more than 1 million followers on Instagram as well, but she continues to be much more active on TikTok. Maintaining a presence across platforms is very important since the popularity of an app can fluctuate quickly, and its important for influencers to make themselves visible in as many places as possible.