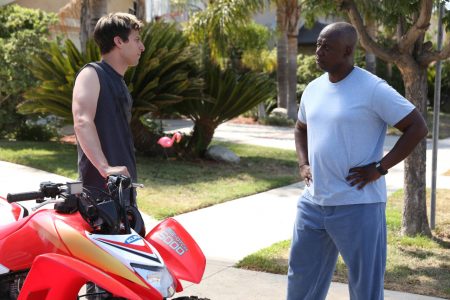 At its core, Brooklyn Nine-Nine has always been an ensemble comedy. The show works best when everyone is together, solving a case or participating in some hijink or another. At the same time though, the pilot episode of the show very much set up one of the core relationships which continues to be one of the most important aspects of the show as the seasons go on: that between Jake and Holt. The season four premiere posed an interesting setup then, excluding every main member from the cast except for those two who first set up the main conflict of the show. With completely different personalities that somehow end up working together, the season premiere featured their relationship once again, as Jake and Holt found themselves in witness protection after the events of the season three finale. In hiding from mob boss, Figgis, the two were forced to keep their identities a secret as they attempted to live normal lives in a Florida suburb. Unsurprisingly, this wasn’t an easy task for either of them.

What was surprising is how quickly Holt seemed to adapt to the suburban life at the start of the episode. He quickly found himself a walking group, a job at Fun Zone where he aspired to climb the corporate ladder to assistant manager, and overall seemed content away from the cop life. Jake, on the other hand, did not adjust as well. Unlike Holt, he yearned to get back to the cop life, and being away from his dream job was taking a toll on him.

While Holt still stayed true to himself, remaining serious about his new job despite its caliber, he also accepted the rules set forth by the precinct. They were not to get involved in trying to find Figgis in any way and were to remain under the radar until the cops back home did their job. Never one to follow the rules, Jake ignored that advice and set out on his own to try to track Figgis down, secretly doing research whenever he claimed to be at his new job. It didn’t take long for Holt to realize what was happening and put an end to it, not wanting to jeopardize their safety.

The two spent a good portion of the episode bickering, with Jake taking the job Holt wanted and forcing him to perform the worst tasks at Fun Zone as revenge for not letting him continue his investigation. It took a potential viral video they found themselves the center of for them to join forces again in an attempt to stop the video from being posted, which would alert Figgis to where they were. For the first time since moving to Florida, they were able to spend a day together working like cops to stop the release of the video. Their adventure, however, ended in more arguments as Holt blamed Jake for letting the woman with the video get away at the last minute, claiming heÂ has not been putting enough effort into the witness protection assignment as a whole. In reality, Jake was able to swap phones with her and get the video but by the time he revealed this information, the verbal damage had already been done by Holt.

Finally taking Holt’s advice, this incident led Jake to conclude that maybe he did just need to accept his life in Florida. At the same time, the taste of police work along with the realization that they could have to be in Florida for years if they didn’t do something, led Holt to finalize realize how much he needed to leave Florida, where he never truly felt alive. With this in mind, he went to Jake and the two were able to put the past behind them and begin working together to find Figgis, their only way out of witness protection.Â Finally reclaiming his identity as Captain Holt and throwing aside the name Greg, HoltÂ came to the conclusion that searching for Figgis would lead them nowhere. Instead, why not just bring Figgis to them. And they had the perfect way to do so: releasing the viral video they still had possession of.

Like many previous episodes, this one did a great job of highlighting both the differences and similarities between Jake and Holt. One a rule follower, the other a rule breaker. One always serious, the other laid back. But at the end of the day, both men care deeply about their jobs and are passionate about what they do. It’s this common trait that allows them to come together so easily and work towards a common goal. And in the process, occasionally Jake is willing to take on the more serious attitude that is sometimes required. Other times, like at the end of this episode, Holt is willing to break the rules in order to accomplish what needs to be done. These characters always end up bringing out the best in each other, despite minor pitfalls and disagreements. When they do finally come together, there is no better cop duo out there.

So overall was the Brooklyn Nine-Nine season premiere solid? I’d say it was. There were some truly humorous moments throughout the episode, one highlight being the running gag of all his coworkers thinking Holt was always high. Maya Rudolph’s guest role also brought a few laughs, especially when she tried to communicate with Jake and Holt over the roar of Jake’s ATV engine. But by the end of the episode, there was still a giant void that was felt due to the absence of the rest of the main cast. With no Charles/Jake bromance, snide comments from Rosa, or cute Jake/Amy moments, the episode just didn’t feel complete. For a show that prides itself on its ensemble, they took a risk with this first episode and while it was still entertaining, it didn’t have the magic that Brooklyn Nine-Nine usually does. Hopefully by the end of next week’s episode, everyone will be back to working together, giving the show the magic touch it needs to go from entertaining to one of the best on television.

Holt and Jake have trouble adjusting to life away from the precinct in the season premiere of Brooklyn Nine-Nine.