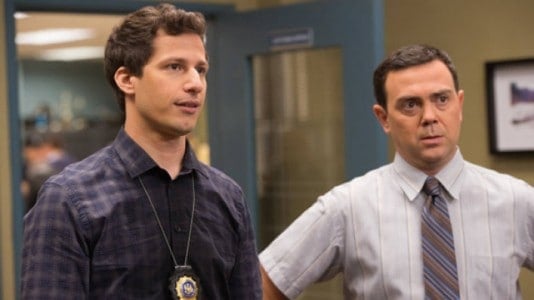 When you think of TV bromances, your mind immediately goes to classic friendships like Joey and Chandler, Turk and JD, Shawn and Gus, Troy and Abed, and…Jake and Charles. This duo has earned a spot on the list over the past three seasons of Brooklyn Nine-Nine. They’ve been there for each other through cases, injuries, and of course dating disasters. I’ve complied a list of five episodes that most accurately define the bromance between Jake and Boyle.

In this memorable season one episode, JakeÂ steps in andÂ acts as a buffer forÂ Boyle, who is prone to go ‘full Boyle’ when he starts relationships, coming on too strong and scaring the girl away. This was one of the first episodes where their friendship was truly established, making it a special one.

This episode featured the return of ‘full Boyle’ but also brought with it some great moments for this bromance. Between pretending to be art critics to singing a delightful rendition of “My Humps,” the duo came out in full force in this episode.

When Boyle and Jake found themselves on a stakeout together, it proved to be one of the best episodes for their bromance. While at first their habits annoyed each other, they were able to pull together and solve the case in the end. And their theme song “Stake Me Out Tonight” is a thing of beauty.

After forgetting to get Boyle a gift for Christmas, the duo finds themselves in aÂ Die HardÂ spoof with Boyle unknowingly tagging along to help Jake find the gift. It led to some amazing moments between the two, from sneaking quietly around to Charles saving the day at the end, attempting to quote Jake’s favorite movie by shouting “Yippee Kayak Other Buckets!”