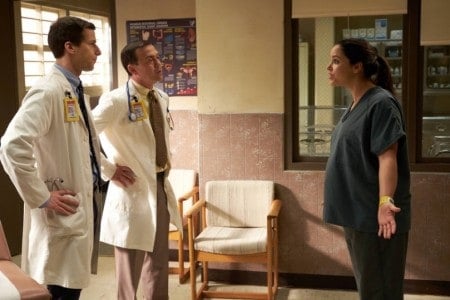 Over the course of the season, Brooklyn Nine-Nine has done just about everything possible to hide Melissa Fumero’s baby bump. When the actress announced her pregnancy, many wondered how they would incorporate it into the show. After all, it would be a bit too soon for Jake and Amy to have kids, no matter how hilarious that would be. Instead, they’ve figured out clever yet somewhat obvious ways to hide the baby bump, most of the time behind giant folders which actually make a lot of sense for a character like Amy to be carrying around.

This week, however, it looks like Brooklyn Nine-Nine will be taking a break from hiding Melissa’s pregnancy, as Amy is set to go undercover at a women’s prison. And it’s Jake himself who gives her the pillow to make it appear as though she’s pregnant, all part of their undercover plan. With Rosa joining her, this is bound to be a fun mission and will definitely be one of the smartest ways a show has dealt with an actress’ real life pregnancy.

Back at the precinct, we’ll see that Amy and Rosa aren’t the only only ones playing pretend in tonight’s episode. Holt and the rest of the team will be faking a funeral in an attempt to catch a hitman. A solid plan but one that with this group will most likely go horribly awry. Especially if Hitchcock and Scully are involved.

Check out the preview clip below to get your first glimpse at tonight’s episode and be sure to tune into Brooklyn Nine-Nine tonight on Fox at a special time, 9:30/8:30 central.