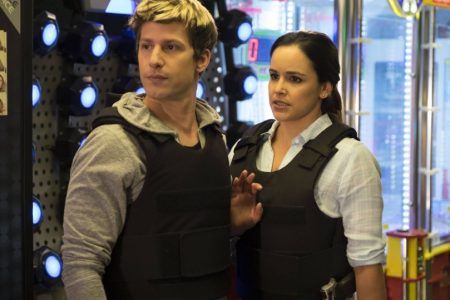 If you like your comedy with a side of action and suspense, then this week’s episode of Brooklyn Nine-Nine was made just for you. Marking the last of the three episode trilogy that started out this season, tonight’s episode brought the group all together again, but not without some mishaps first. In an episode full of great character moments, some of the biggest laughs the show has had in a while, and a thrilling end to the Figgis case, Brooklyn Nine-Nine proved that they really can execute a multiple episode arc. Wrapping everything up can often be the most difficult part of doing this, but they were more than up to the task, putting together a very satisfying final act.

Before everyone could come together to take down Figgs, Jake and Holt shared their last moments in Florida alone together, on the run after having been broadcasted over the town as known criminals. Trying to run from someone who recognized them, Holt found his leg impaled on a rod, while Jake complained about being in ‘scratch city.’ These last few scenes of theirs away from everyone else really showcased how well the two actors work together as both Samberg and Braugher brilliantly played off each other in the aftermath of this scene. From Jake’s immediate freak out, to the two having to patch up Holt’s leg, this whole story was comedy gold.

One of the best parts of the episode came from Jake being too much of a whimp to patch up Holt, leaving Holt to do it himself. In a perfect display of who these characters are, Holt ended up having to take the rod out and sew himself up, all the while reassuring Jake, who was turned away, that he was doing a great job of remaining calm and that it would all be over soon. Even though he was in the one in extreme amounts of pain, it was of course Holt comforting Jake.

While Jake and Holt were dealing with that, the rest of the squad found themselves on a road trip to Florida to help them catch Figgis. In true fashion, the road trip was an absolute disaster, with Amy providing fun facts, Charles critiquing Terry’s parenting (a delightful running gag in this episode that led to the creepiest lullaby you’ll ever hear), and Scully playing the roll of that one annoying person who has to stop to use the bathroom every five minutes. This all led Terry to his breaking point, as he turned around to yell at them, much like a father does with his children on a road trip, ending up causing a fender bender. Despite this, the squad made it to Florida safely, and that’s where the real fun began.

One of the main issues this episode addressed was, how would Amy and Jake react to being back together after spending six months apart? It didn’t take long to realize that the distance had made things between them somewhat awkward, with the two being completely out of sync. Their initial reunion started with Amy punching Jake in the throat (thinking he was a threat) and ended with Charles getting in the way of their reunion kiss, once again taking on the role of the audience and telling them to “let those Nicholas Sparks fly.”

It only got worse from there for the couple as they kept accidentally injuring each other, remaining on different pages all episode, one wanting to wait to talk about it while the other wanted to address the awkwardness right away. For a couple that had been so strong at the end of last season, it was interesting to see this very different side of them, one that could easily come out after being apart for so long. The two had to persevere through their personal issues to address the problem at hand for much of the episode, though.

As everyone knows, this show works the best when the whole squad is together, and that is exactly what this episode provided us with. Everyone banded together to take down Figgis in an action packed sequence that utilized each person’s strengths, even allowing Hitchcock and Scully to chip in. With a trap set to lure Figgis to Fun Zone, everyone except Gina and Holt waited for him there, the other two staying behind because of Holt’s injury.

Once Figgis arrived, Hitchcock and Scully worked as the eyes of the group, also providing much needed distractions while the rest of the Nine-Nine used their fighting skills to take down Figgis’ men. While they were doing this, Jake found himself face to face with FiggisÂ himself, the man who had ruined Jake’s life by forcing him to live in Florida for six months. Jake quickly got the upper hand, but when the small town cop who had been after them all episode arrived, he lost that advantage. With Jake forced to put his gun down, Figgis used this to shoot the cop and turn the tables on Jake, holding him at gunpoint.

In the end, it was Amy who saved Jake from Figgis, when the two finally managed to get on the same page. With a magical nod, Jake communicated to Amy that she should shoot him in the leg, forcing Figgis to let him go and for Amy to go after him. Even with all their doubts and fears, Jake and Amy were able to prove that when it matters, they are always on the same page. Their plan would have worked, too, if Figgis hadn’t escaped quickly to his car, leaving Amy unable to do anything.

Thankfully for everyone, Gina and Holt drove in to save the day, having decided they couldn’t just sit back and do nothing. Holt insisted on helping the squad and in a heroic move, Gina was able to transport him into a truck on a trolley so that the two could get to the Fun Zone. And they got there just in time to hit Figgis head on with the truck, which the two were attempting to drive together with Gina taking the pedal and Holt doing the rest of the work because she couldn’t drive stick shift.

Watching these two interact is always a pleasure and another layer was even added to their friendship, as we learned that they have ‘daily dishes’ together, in which they gossip and chat about anything that comes to mind (who knew Holt was so big on gossip?). On top of that, the physical comedy they brought to the episode was top notch, with one of the biggest laughs comingÂ when Gina tried to carry Holt on her back to the truck, immediately collapsing them both.

In both a suspenseful and ultimately hilarious confrontation with Figgis, everyone was able to bring their own specialties to the squad, proving that each and every one of them is a valuable member of the team. And that right there is the core of the show: recognizing that each person, as strange and different as they may be, are able to bring something unique and important to the squad. That, combined with how much they acknowledge each other’s strengths and genuinely care about each other, makes them moreÂ like a family than anything else. And together, they can really accomplish anything (which will bode well for them all when their punishment of night shift starts next week).

The squad came together to take down Figgis once and for all in a very humorous and action-packed episode of Brooklyn Nine-Nine.