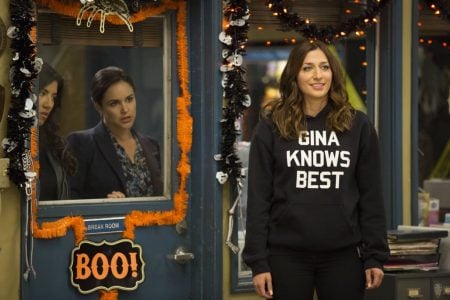 No one can say that Brooklyn Nine-Nine doesn’t know how to do a Halloween episode. They proved their expertise in this area once again tonight, as the precinct participated in the fourth annual heist competition. Jake and Holt’s battle, which was unexpectedly won by Amy last year, has always been a highlight of each season and this year, they got everyone involved. With Jake, Holt, and Amy picking one team member each, the squad split into pairs, with the winning duo claiming the title of The Ultimate Detective/Genius for their leader, once and for all. What this episode ended up proving, however, was how well these characters know each other.

This year’s heist was all about outthinking the other teams. With the trophy placed in a locked box in the middle of the precinct and each team locked in separate rooms, the first team to get to it and successfully keep it hidden from the other teams for the remainder of the episode would be declared the winner. Proving he knows how Jake works best, Holt was able to start with an advantage by picking Charles for his team, taking away a large part of his opponent’s strategy. This left childhood friends Jake and Gina to work together while Amy and Rosa paired up as the final duo. With Terry declaring that heists are dumb and Hitchcock and Scully tasked with watching him to make sure he wasn’t secretly planning a heist of his own, the groundwork was set for the games to begin.

The actual battle was highly entertaining, as Jake made adjustments to his plan and used Gina in Charles’ place to complete his plan. However, a dental injury left Gina out of commission and with the trophy and everyone else now out in the open, it was anyone’s game to win. From a hilarious ambush of pizza men, staged by Amy and Rosa, to the reveal that Holt had purposefully stressed out Amy to find her secret hiding place, all culminating with Jake knowing exactly how to turn Charles against Holt in a heartbreaking betrayal, the trophy switched hands many times throughout the episode. Each team had to use the knowledge they’d accumulated about each other (apparently Holt studies everyone enough to know that Rosa usually favors her left leg) to find and steal the trophy for themselves, leading to some hilarious moments.

At the end of the heist competition though, a twist was thrown at all three teams, as they each held a trophy, believing that they had won. A black light revealed that each trophy had one word on it, coming together to say “heists are dumb.” With only one suspect in mind, they raced to Terry but ended up locked in the interrogation room with him as the true winner stepped forward. From the very beginning, Gina had been playing them, using her fake dental injury to leave the competition and spending the rest of the day wearing Amy’s clothes at the precinct, making her invisible to everyone.

This is when their true knowledge of each other’s habits and behaviors became clear, as Gina explained step by step how she orchestrated every aspect of the heist, by manipulating differentÂ members of the squad and predicting their responses. It was Gina who planted the idea of picking Charles for his team into Holt’s head. From there, all she needed to do was fake her injury, blend in, and follow the teams to their hiding places, replacing the real plaque with fake ones. The other key to her plan though, came from knowing ahead of time that Terry’s exact reaction to the idea of heists was to call them ‘dumb.’ After all, according to Terry almost everything is dumb, including belts, the backstroke, and hummus. If she hadn’t known Holt would pick Boyle, landing her on Jake’s team and allowing her to fake the injury or hadn’t known that Terry would call heists dumb, her plan would have fallen apart completely.

In a brilliantly put together Halloween episode, where the only person who could predict what would happen next was Gina herself, Brooklyn Nine-Nine kept us on our toes throughout the half hour. The twists and turns in the episode were fun to watch play out, as was seeing everyone on the squad’s competitive nature play out against each other. Particularly hilarious was seeing Rosa for once embrace Amy’s propensity to plan every detail out, following her outline step by step in an attempt to win. Their friendship is quickly becoming one of my favorites on the show, as they continue to prove they could easily form their own Babysitter’s Club. The only disappointing part of the episode came when it ended, signifying another year long wait until the next big heist.

MVP of the Episode: I think it’s imperative right now to take a moment and appreciate how amazing Holt was in this episode.Â The seriousness with which he approached the heist was highly entertaining to watch. Andre Braugher had so many great lines in the episode, nailing every single one of them with the deadpan we’ve come to expect from Holt. His scenes with Charles were also a delight, as this pairing isn’t one we see often. And let’s not forget, Holt went so far as to train Cheddar in advance to retrieve plaques just to win the heist. This man is a hero.

Brooklyn Nine-Nine proved that heists are not dumb, but instead highly entertaining, in their fourth annual Halloween heist episode.