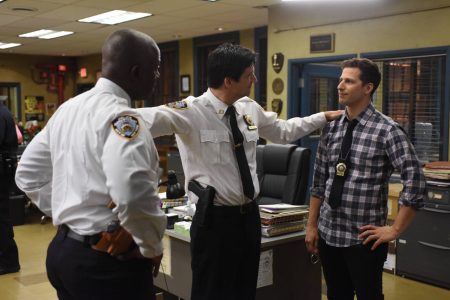 Brooklyn Nine-Nine has been doing a lot Â of things right this season andÂ the parade of hilarious guest stars isÂ just one of them. That particular trend continued in tonight’s episode, as Ken Marino returned to reprise his role of C.J., the incompetent captain who replaced Holt on the day shift and banished the whole squad to night shift after they disobeyed him to save Jake and Holt earlier this season. It would have truly been a crime to not bring Ken MarinoÂ back, as he brings laughs to every project he’s part of. Along with that, he was key to getting the squad back on the day shift where they belonged. But that wasn’t going to happen without some intervention from Jake and Holt.

While these two characters started the season together in witness protection, giving us some hilarious storylines for them, it’s been a while since we’ve seen them back working together on the show. The mission to get back on day shift provided the perfect opportunity to bring them together again, as their different approaches were once again highlighted with the end result being the realization that in a lot of ways, they’ve changed each other.

When C.J. accidentally lost important evidence for a case, Jake wanted to use the opportunity to get him fired while Holt wanted to help the other captain, very in keeping with the personalities of the two men. But when Jake found out that the lost evidence meant C.J. wouldn’t be transferred to another station like C.J. had hoped, he immediately joined Holt in trying to help C.J. look good, which would ultimately allow for the transfer and get rid of the man. In some highly comedic scenes, a highlight being Jake and Holt undercover trying to get information with C.J. talking absolute nonsense in their ear, the three men set out to take down someone big in the drug circle.

Despite all their efforts, it was incredibly difficult to make someone as incompetent as C.J. look good. They ended up sidelining him to get their man, but in a stroke of luck and a well-timed opening of a car door, it was C.J. that knocked out the man they were trying to catch, earning himself all the credit. Throughout the episode, we saw Jake and Holt struggle with each other on their motives for helping with the case. Holt’s impassioned speech (one of the best he’s ever given, in his opinion), wasn’t enough to convince Jake they should help C.J., with Jake only deciding to help when it fit in with his own selfish motives. On the other hand, Holt was willing to help despite whatever he felt about C.J., simply wanting to do what’s best for the precinct as a whole.

In the end, we saw that over the years maybe Holt has picked up on a thing or two from Jake. We’ve seen the reverse quite a few times, as Jake has taken on a more serious attitude when the moment calls for it. In this case though, it was Holt who took a page out of Jake’s book, ultimately setting up a press conference that he knew C.J. would embarrass himself at, opening the door for him to be fired from his current position and allowing the squad to end up back on day shift where they belong. Holt is a patient man but even he got to the point that he could no longer stand C.J., and he finally realized that Jake was right and something needed to be done about it. Seeing the influence that these men have had on each other over the years has been one of the most rewarding parts of watching the show. We’ve seen Jake do many things that his character never would have done when the pilot aired and just tonight we saw Holt do something that his past self would never have done.

Meanwhile, the show once again turned the early conceived notion that Gina is an all-around selfish and self-centered character and flipped it on its head. Initially, when Terry was given the task to reduce the amount of energy used at the Nine-Nine, everyone except Gina listened and stopped using high energy usage devices (it took Amy a little longer than others because saying goodbye to her laminator was very difficult). When all was said and done, Gina was the lone holdout, going to extreme lengths to not give up her space heaters. Having recently failed a test, Terry’s confidence was low and having an employee so blatantly not listen to him wasn’t helping. He figured if he could beat Gina in this standoff, then he’d be okay.

For a while, this episode really had me believing that Gina was an awful person. I was honestly a bit confused as to why Gina was being so terrible to Terry. Of course, I should have known that she had something up her sleeve the whole time. By steadfastly refusing to listen to Terry for so long, his victory was even sweeter when she finally gave in. All along, she knew that this would be the case and spent the episode tearing him down just to give him that much stronger of a feeling of confidence when he finally beat her. Gina Linetti really is a genius.

Jake and Holt tried to get the squad back on day shift in a very entertaining episode of Brooklyn Nine-Nine.