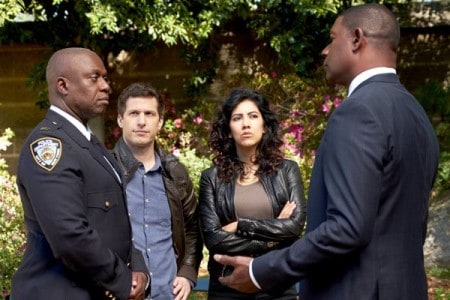 Tonight’s episode of Brooklyn Nine-Nine, which featured the squad planning a heist to steal an FBI file, was a bit uneven in terms of comedy, with some high moments and some that fell flat. Overall, it was another strong episode of the show, however, as it dove deeper into their mission to find the mole in the FBI and make it safe for Pimento to return. With this new multiple episode arc that the show is trying, they’re able to throw a lot of curveballs at the audience, resulting in more suspense and even a few cliffhangers, something we rarely see on the show. It’s mixing that suspense with the ever present comedy that’s kept the show so fresh and entertaining as they near the end of their third season.

Still trying to find the mole, the group met up with an old colleague of Holt’s who now works at the FBI and who’s mannerisms and personality are an exact match to our favorite captain’s. Bob joined them as they finally were able to place who the man with the scar on his hand was, leaving them with the task of finding evidence so that they could actually put him away. This led them to the conclusion that they’d need to break into the FBI and steal files on the man, to prove that he’s hidden evidence in the past. Through all of this, we were treated to brilliant performances from Andre Braugher and Dennis Haysbert, as the two matched each other perfectly.

The episode didn’t really pick up until the group began planning the elaborate heist, using pieces of lint to depict themselves. Listening to Braugher and Haysbert describe their lint so seriously and in such detail was truly entertaining, as was the montage that followed of everyone preparing for their role in breaking into the FBI. With Terry teaching Jake to do a single pull-up to fulfill his role, Rosa flawlessly showing off her yoga skills, and Gina teaching Holt everything there is to know about Sex in the City (the city really is the fifth character), this was easily the highlight of the episode.

And all of Holt’s Sex and the City training came in handy, as he was successfully able to distract the guard while Rosa and Jake put the rest of the plan into motion, stealing the file they needed. Let’s take a moment and appreciate the fact that we all got to listen to Braugher deliver a long monologue about a show that Holt would never actually care about, putting into it his usual deadpan but convincingly making us feel like he understood the show. That man is truly a comedic genius.

With the mission seemingly successful, Brooklyn Nine-Nine once again nailedÂ the slow-mo walk away shot, broken up by a ridiculous comment by Jake to ruin the effect, which we’ve seen many times before. What none of them noticed however, was that Bob had switched the file on them on their way out, giving them false information. They used it to go arrest ScarJo, but by the time they got there, he was almost dead. It wasn’t until the end of the episode that everything finally came together, and Amy’s undercover work was able to reveal that Bob himself was also a mole in the FBI. In the biggest cliffhanger we’ve seen on this show, the episode ended with Bob holding Holt at gun point, leaving us wondering how the squad will be able to stop him.

Another thing this episode long arc has achieved is bringing together different storylines and connecting everything. While everyone else was planning the heist, Amy and Charles were still working undercover at the prison, getting info from someone who had been on the inside of Pimento’s undercover operation. While their storyline could have used more focus, and it seemed kind of rushed to throw in Charles’ adoption, which we’ve heard almost nothing about recently, into such a small part of the episode, they did manage to bring the information gathered here and tie it into the rest of the episode. Having different moving parts working together like this has been interesting to watch so far and as the season comes to an end, I’m sure we’ll see more of it.

Of course, there are still going to be dud moments in the episode, this time coming from the Gina and Terry C-plot, where he was trying to find out who leaked information to the press (no surprise that it ended up being Terry who accidentally leaked it), but overall they’re doing an impressive job with this arc. They’ve kept the show fun, but added some suspense and drama, keeping the audience both entertained and on the edge of their seats.

The squad planned an elaborate heist in another strong episode of Brooklyn Nine-Nine that ended with a shocking cliffhanger.