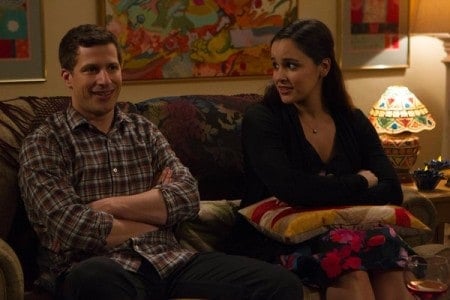 Anyone who has watched Brooklyn Nine-Nine knows that Jake has a less than perfect relationship with his father. The man abandoned Jake and his mother when he was a child and since then has been fairly absent in Jake’s life. Growing up without a father figure was difficult for Jake but thankfully he found that needed role model in Captain Holt. Regardless, he’s never been able to forgive his father for leaving his family behind. What we didn’t know going into this episode, however, was what Jake’s relationship with his mother was like. Having been raised by only her, it’s no surprise that they seem to have a strong relationship, with Jake always looking out for his mom. This week’s episode of Brooklyn Nine-Nine did a fantastic job of exploring Jake’s relationship with his parents as well as showing just how well he and Amy are doing as a couple.

Over the course of the season, we’ve seen Jake and Amy take many steps forward in their relationship, admitting that they want to be together, making the relationship official, and finally saying I love you. Another step forward was taken in this episode when Jake decided to introduce Amy to his mother at a dinner for his birthday. In true Amy fashion, she went all out preparing for this meeting, studying literally everything there was to know about Jake’s mom, including her credit score and oddly, her dental records. As someone who is always trying to impress and gain respect from authority figures, it’s no surprise that Amy would see impressing Jake’s mom as something very important.

However, when drama broke out with Jake’s dad appearing at dinner and announcing that he was dating Jake’s mom, Amy proved that her relationship with Jake was more important than making a good first impression. She was willing to embarrass herself so that Jake could accomplish what he needed, showing just how much she cares about him. Melissa Fumero was absolutely hilarious in this episode as she questioned Jake’s style choices in high school and gave a brilliant rendition of Itsy-Bitsy Spider which will now also be my go-to song in awkward situations. Both the actors and writers do such a great job of selling this relationship while at the same time not over-powering the show with it, finding the perfect balance in having two characters together romantically on a show.

The true struggle for Jake in this episode of course came from the shocking reveal that his parents were dating. Ever since his dad left him and his mom, Jake’s only goal has been to protect his mom from getting hurt and he still sees his dad only as someone who will hurt her. Doing everything in his power to stop this from happening again, we saw another side of Jake that we had never seen before: a caring and loving son who just wants what’s best for his mom. When he realized that his mom knew everything his dad had done and still wanted to be with him though, Jake was willing to step back and let it happen. His relationship with Amy has really helped him mature over the course of the season and while he’s always deep-down been a caring person, he seems to be making more mature decisions this season. This character growth has been great to see and overall this story-line offered solid laughs amidst some very sweet moments between Jake and his mother.

Brooklyn Nine-Nine was firing on all comedy cylinders tonight, with a hilarious subplot revolving around an escape the room puzzle. Whoever thoughtÂ of puttingÂ Holt, Gina, Hitchcock, and Scully in a locked room together for almost a whole episode was a genius. While these four may sound like the last team you would expect to solve a complex puzzle, they somehow managed to pull it off, mostly thanks to Scully finding one of the keys they needed in a peach can. You can’t say his love for food never got him anywhere.Â The team proved that even with what may be considered some of their weakest members, they are still a strong team, even if that means stumbling upon answers. Gina especially is one character who never exerts much effort but maybe this episode proves that you don’t always need to put in effort to succeed. No matter what point was trying to be made, this was one of the most entertaining subplots we’ve seen this season, proving why the show could always use more Hitchcock and Scully.

Not to be outdone, the plot-line revolving around Boyle, Rosa, and Terry was also very entertaining. Using body cameras for the first time on an important stakeout, there was no way this wasn’t going to end in disaster. Naturally, when they finally managed to catch the criminal, Boyle was in the nude, having spilled soup on his clothes and camera. Luckily, Rosa was there to catch the arrest on her camera, along with capturing Boyle in all his naked glory. They needed the evidence from her camera to lock away the criminal, leading to what is likely one of the more embarrassing moments of Boyle’s life. This story offered a lot of great one-liners from Rosa, whose deadpan delivery is nothing short of brilliant. In one of the best episodes of Brooklyn Nine-Nine of the season, this rounded out what was overall a very impressive episode.

Jake struggles with his parents relationship in one of Brooklyn Nine-Nine‘s best episodes of the season.