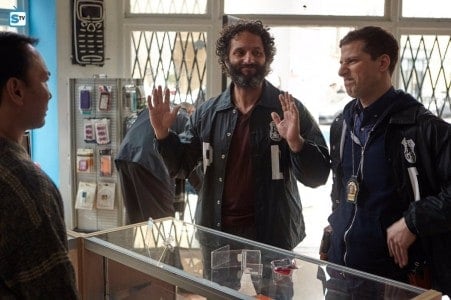 Tonight’s episode of Brooklyn Nine-Nine was far from their funniest episode of the season but that doesn’t mean it was all bad. While the episode started out slow, it picked up speed toward the end, providing a fairlyÂ amusing third act that took the episode up a notch. But still, a few of the things they tried in this episode just didn’t seem to work, while others only halfway landed. One thing it did accomplish was providing yet another interesting insight into Jake, this time concerning his time spent undercover.

In the long string of guest stars that have appeared this season, Jason Mantzouka joined the Nine-Nine this week as his character, Adrian Pimento, returned after having been undercover for twelve years. During those years, he saw and did many things that no man should have to do, all for the sake of maintaining his cover. Obviously, coming back from this, he was still in a pretty messed up mental state. Jake took it upon himself to work a case with Pimento in this episode, thinking that they could bond over their time spent undercover.Â As we’ve seen many times, Jake is always focused on how cool something seems, which is why he at first could only think about how awesome Pimento’s undercover work was. He quickly realized, however, that maybe it wasn’t as great as he thought it was.

Through working the case with Pimento and first earning the other man’s trust and then losing it when he began investigating Pimento behind his back, Jake came to realize a few things in this episode. The biggest realization is that no matter how cool something looks, the reality is rarely what you’d imagine it to be. Perhaps the strongest moment in the episode though, came from Jake finally being open about his own undercover work. After realizing his mistake with Pimento, he finally placed his trust in the other man, revealing that his work wasn’t as cool as he made it out to be. In reality, Jake has no idea what Pimento’s going through and all he can do is be there for him as he figures it out. It’s these moments with Jake that make him a strong lead character in the show and while his goofy sense of humor is definitely entertaining, the character would be hard to connect to without that honesty and openness that we occasionally get to see.

The moments with Mantzouka were hit and miss in terms of comedy and while some of the depictions of violence from his undercover days were too much for me, I did enjoy seeing him in Â some of the subtler moments. His brief portrayal of a bag boy was very entertaining and overall he really did sell the arc of his character in the episode. He was believable in his role and truly did garner sympathy when it came out that Jake hadÂ misjudged him. The whole aspect of Rosa being attracted to his character was one of the biggest flops of the episode and seemed to be there more as a punchline than for any particular reason. And it was overall a pretty weak punchline, especially since the most recent romantic relationship we’ve seen Rosa in was with Marcus, who was a good man.

Ups and downs in the episode came from other storylines as well, one of which revolved around Boyle, Terry, and Amy trying to get the garbage crew, led by Kate Flannery, to clean up a mess they made. This led to a refusal from the crew to clean up anything at the Nine-Nine, as they did not feel they were respected. In the end, the two sides were able to make up when Boyle announced that the break room would be named in honor of Flannery’s character. There was nothing particularly interesting about any of this though and it left quite a bit to be desired in terms of comedy. Boyle and Amy are usually good for at least a few laughs an episode, as are the others, but the story never opened the door for any real comedy. In fact, Hitchcock and Scully’s involvement was one of the only saving grace’s of this plotline.

Gina’s video she was making for Holt fared a little better, as it’s impossible not to get a few laughs when you put two deadpan actors like Andre Braugher and Stephanie Beatriz next to each other. Especially when you have Chelsea Peretti telling them to act with pizzazz. Between Holt’s refusal to karate chop his way through the fog to Rosa’s confusion about the wheelchair she rode in on becoming a horse through special effects, this garnered the most laughs of the episode. More focus on this plotline for Rosa would have benefited her. It may have workedÂ better if Charles had been the one Jake had confided in about Pimento instead of Rosa. This would have opened the door for more comedy from that storyline while also allowing Rosa to work more with Holt and Gina, where she shined in this episode. Despite a few missteps, the episode still did have it’s moments and really did provide a nice third act. It just fell a little short from the quality I’ve come to expect from this show, though.

Jake learned a thing or two about the true effects of undercover work in an episode of Brooklyn Nine-Nine that fell short.