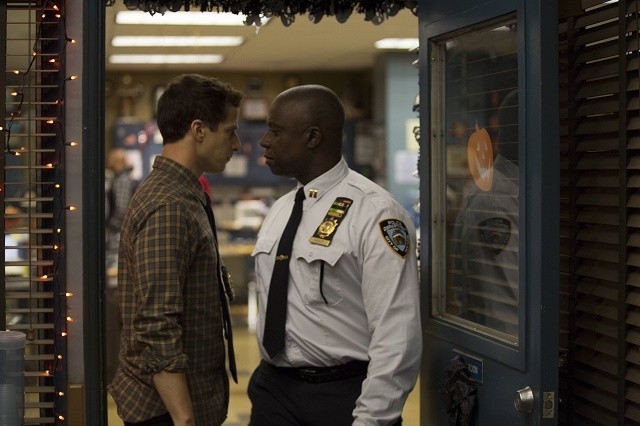 If there’s one thing Brooklyn Nine-Nine is known for, it’s incredible Halloween episodes. A tradition that has been around since the first season, every year, Holt and Jake compete to outsmart each other, attempting to steal a valued item right out from under the other’s nose. With a tie going into the third season as both men had alreadyÂ won once, the stakes were raised in last night’s hilarious episode, as Jake and Holt attempted to steal the exact same object: a crown placed in a suitcase in the interrogation room. And to makes things even more interesting, they each drafted teams out of the remaining members of the Nine-Nine with Charles and Rosa landing on Jake’s team, while Gina and Terry joined Holt.

In a storyline that united all the characters in a common goal, this episode provided many laughs. The competitive natures of Holt and Jake are always fun to see clash, as they both are willing to do anything to beat each other, and that includes making Boyle put cockroaches up his pants leg to use as a distraction against Gina, arguably one of the grossest things Brooklyn Nine-NineÂ has ever done. Seeing the different characters work together and against each other helped make this one of the best episodes of the season so far. It’s not often we see seeds of distrust between the Nine-Nine, but when it comes to such an important competition, it’s delightful to watch.

While the episode may have been set up to be entirely focused on Jake and Holt, in the end, it was Amy who ended up stealing the show (and the crown). Neither man was willing to trust her on their team, thinking that she might easily backstab him and end up helping the other; because of this, she was left completely out of it. Instead of just accepting this and letting it happen, Amy took matters into her own hands, observing everything that Jake and Holt were planning, and then using that knowledge to steal the crown herself.

Brooklyn Nine-Nine has managed to accomplish something with its female characters that many other shows struggle to do. Instead of just being pushed to the background, only given stories that revolve around romantic relationships, these women are shown to have very real career aspirations and desires outside of who they’ll be dating next. This was highlighted in last night’s episode when Amy, after being looked over by Holt and Jake, proved that she really is the smartest on the team, easily walking away with the crown without anyone suspecting her. Sure, she’s dating Jake, and yes, she is often looking for Holt’s approval, but at the end of the day, Amy is her own person and is not willing to let anyone ignore how good she is at her job. Her purpose in life comes from the work she does, just like so many women in society today, and it’s great to see that portrayed on television.