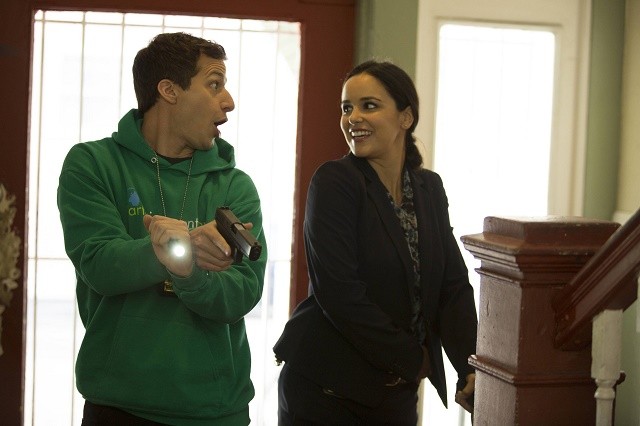 In an episode about learning lessons, Brooklyn Nine-Nine brought itsÂ A-game in terms of comedy and delivered yet another fantastic episode last night. Between Holt having to accept his own fault in a mishap with Boyle, Rosa discovering what it means to be a mentor, and Jake and Amy facing their first major fight as a couple, everyone in the Nine-Nine had problems to resolve, relying on advice and help from each other.

For Holt and Boyle, trouble arose when Boyle accidentally scratched Holt’s beloved car trying to pull into a parking spot. The catch was that Holt had been parked partway into Boyle’s spot, thereby leading Boyle to think it wasn’t his fault. While Boyle might come off as a bit of a pushover, in this instance, he wasn’t willing to take the blame for something he didn’t feel responsible for. It was nice to see Boyle stick up for himself and even nicer to see Gina step in and help him out when Holt’s initial reaction to Boyle’s declaration was anger.

Instead of letting Boyle stew in hot water with the captain, Gina went about teaching Holt a lesson by placing a cupcake on his seat and watching him sit on it. Like with the car, the cupcake was in a place where it shouldn’t have been, and therefore, Holt sitting on it was like Boyle hitting his car. One of the best running gags of this episode was everyone over-explaining the lessons they were teaching, and this was no exception. With Gina’s help, Holt was able to realize his mistake, and Boyle was off the hook. Gina can often come across as self-centered, but in the end, when her friends need her, she is always there for them.

Rosa also had a lesson she needed toÂ learn in this episode of Brooklyn Nine-Nine,Â and Terry was there to help her. We discovered that Rosa has been mentoring a younger kid named Sam through the Big Brothers/Big Sisters program, and like everything, Rosa treated this responsibility with her usual abrasive attitude. It’s clear she cares a lot about helping her ‘little brother’ out, but it’s often hard for Rosa to express emotions other than anger and sarcasm. After witnessing one of their interactions, Terry stepped in and tried to explain to Rosa that sometimes kids need love and support instead of always being so hard on them.

Right away, this belief was put to the test as Rosa’s ‘little brother’ was arrested for shoplifting. She was faced with the choice of giving Sam a warning or sending him to juvie. With a little help from Terry, who has plenty of parenting experience himself, she was able to realize that the best thing to do for Sam was to let him off with a warning so that he wouldn’t quit the program. Instead of her following her gut reaction, which was to punish him for his behavior, she stopped and listened to Terry, realizing that it would benefit Sam more to be given another chance. This goes against how Rosa was raised, but thankfully, she had Terry there to offer her guidance.

The biggest problem in last night’s episode arose when Jake and Amy began fighting about the mattress at Jake’s place. Amy had barely been getting any sleep at night because of how uncomfortable it was, but Jake didn’t see the point in investing in a new mattress. At the same time, he was feeling hurt that Amy hadn’t mentioned their relationship to her mom yet. All of this came to a head as they worked a case together, the tension of their couple’s spat rising and ultimately leading to them making a costly error in the case.

Like the audience, Boyle lost some sleep over this fight between Jake and Amy, but luckily for him (and us), Jake’s own mentor of sorts, Holt, stepped in to save the day and teach Jake a valuable lesson. From his own experience, Holt knew that it’s difficult to be the first one to make a big move that shows you care about someone in a relationship; however, he made sure that Jake knew that in the end that making the first move is worth it. With that knowledge, Jake made the commitment to a knew mattress, signifying a commitment to his relationship with Amy as well. And in return, she made the decision to tell her mom about the relationship, leaving both of them happy and in love again.

Brooklyn Nine-NineÂ is doing a great job of portraying the ups and downs of a relationship, especially one in which the characters work together. And like always, the series managed to produce an episode with plenty of humor that still showed how much these characters are willing to do to help each other out. The comedy combined with the heart of the show are what makes Brooklyn Nine-Nine such a hit.