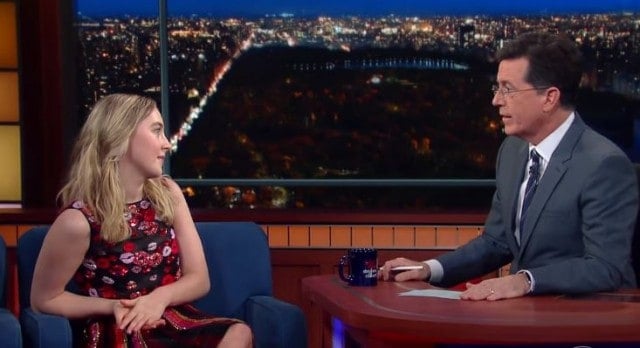 Irish actress Saoirse Ronan has received rave reviews for her performance in the sure-to-be Oscar nominated filmÂ BrooklynÂ (I’ve seen it, and she lives up to all the hype), and she stopped by The Late Show With Stephen Colbert last night to discuss the film. As anyone who has ever heard Ronan speak will know, she has a very lovely Irish accent, so it didn’t take long before her and Colbert’s conversation moved toward what a real Irish brogue is and if he could do one.

In the video below, Ronan gives Colbert a lesson on how to speak with an Irish accent, and while the Late ShowÂ host doesn’t quite master it, he does do a pretty decent one that the BrooklynÂ star herself calls “not bad.”

“It’s not great,” Ronan tells a laughing Colbert, “but it’s not bad.”

Also during their interview, Colbert and Ronan go over the correct way to pronounce her first name (“Ser-sha like inertia,” which is actually something that Ryan Gosling came up with when he was presenting the BrooklynÂ actress with theÂ New Hollywood Award at the Hollywood Film Awards back in November) before he has her go through a whole list of Irish names, from “Tadhg” to “Caoimhe.” Even as someone who is of Irish heritage, I had no idea how to say half of the names (the easiest of the group is “Siobhan”) that Colbert brought up; in fact, I was just as astounded as he was when Ronan explained what the majority of them are actually supposed to sound like.

Watch Stephen Colbert attempt to learn an Irish accent and be amazed at the pronunciations of different Irish names in the video below. And if you haven’t already, go to the theater and seeÂ BrooklynÂ as soon as you can. You won’t be disappointed.