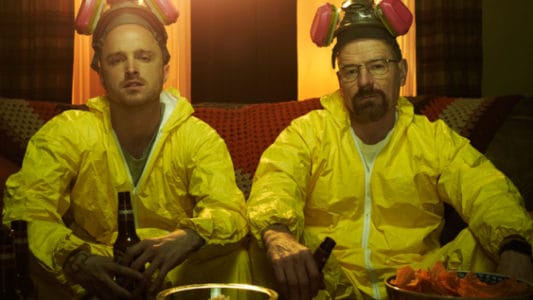 There’s got to be a way to sneak a cameo of Aaron Paul and Bryan Cranston into the sixth season of Better Call Saul, but I’ll agree with Jeremy Dick of TVWeb, it needs to make some sort of sense to go along with the story. That shouldn’t be too hard to fit them into the story somehow in a coincidental manner that doesn’t necessarily bring them together or even into the same frame, but it could happen. It might even be possible to use a flash forward that would help the whole scene to make sense and tie it all together considering that where Jimmy’s at now, it would still be a while before he met the two cooks and as a result it would be kind of awkward to meet them and lose the continuity. The fans are adamant to see Walt and Jesse again, but a lot of people need to realize that in order to do this things have to work out in a certain way, and it’s bound to give the writers a bit of stress to think on just how this could happen and if it should. For their own part, Aaron Paul and Bryan Cranston are definitely on board with the idea and would love to come back for the last season, just to be seen in the show in order to help wrap everything up.

It might be kind of awkward to be certain since everyone has aged quite a bit since the beginning of the whole fracas that made Better Call Saul possible. But if it was ever possible it does sound as though it might be something that could possibly happen. Of course now what people are wondering is if there’s going to be another spinoff that might come from the Breaking Bad universe or if there might be one that could come from Better Call Saul. In other words, people don’t want the story to end. It’s not hard to figure out why, this particular story has been intoxicating since it started, no pun intended really, and has gripped people in a way that has been kind of odd to watch at first but became far easier to understand upon watching a few episodes here and there and getting the overall gist of the story. By the time that understanding came the question was no longer how people could really stand it, but how people were going to react when it was finally all over and there was nothing left but to find another show to latch onto as this one went on to be archived eventually. Ben Sherlock of Screenrant has a few predictions that people might want to see for the coming season.

AMC has been on a roll with their shows in the past decade and more and has been entertaining people in a big way, but Breaking Bad and Better Call Saul have definitely gone above and beyond while other shows such as The Walking Dead and even Fear the Walking Dead have had their share of ups and downs. The shows focusing on the world of Walter White and Jesse Pinkman however have become a kind of calling for many people that have taken to enjoying the shows in a manner that’s almost manic in some cases. It is a big wonder as to what’s going to happen once the season ends and people have to find something else to watch, but likely as not AMC will come up with something else or people will look to other networks for their entertainment and discover other shows that can fill the void or possibly grip their attention just as easily. Saying such a thing almost sounds like it would be seen as sacrilegious to some people, but there are plenty of fans that have become so enamored of these two series that even uttering such an idea would be a punching offense. Well, maybe not that bad, but there might be a little animosity at least.

It’s uncertain whether the two are actually going to be seen in the last season of BCS, but at this point anything could happen really since with the last season of any show the stops are being pulled out and things are being allowed to wind down in a way that offer revelatory experiences in order to make everyone happy and give as many details as possible without giving everything at once. Aaron Paul figures that El Camino was a good enough ending for his character, but he’s also up for coming back if he gets the call, along with Cranston. Both men have gone quite a ways since their Breaking Bad days, but it feels fair to say that they likely have soft spot for their characters that won’t be likely to away all that soon. After all, Jesse and Walt did go through a lot together.