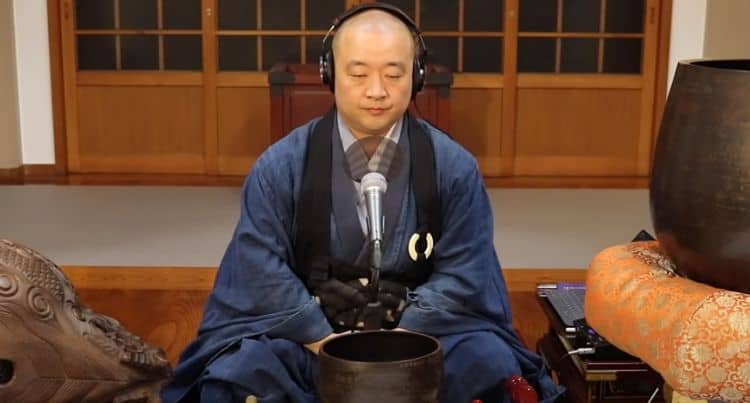 Well, that was unexpected. Who would have guessed that a Buddhist monk would get on YouTube to cover Metallica’s song ‘Enter Sandman‘? It was definitely something that a person might not have thought to see just out of the blue, and while expectations were kind of all over the place, the performance we got was, well, a different interpretation of the classic track. It’s not exactly something people would think of when bringing to mind a monk of any order, especially since one would think of men in long robes sitting in meditative silence, or with soft, gentle music in the background, not something like Metallica blasting away as the monk in question bangs out a beat and sings along. But life is made for surprises honestly and this was definitely something of a surprise since it wasn’t expected, that’s for certain. But one thing that we should be able to fall back on, all of us in fact, is the realization that no one was born a monk and therefore many that come to this point in life have usually experienced a good portion of what life has to offer. Plus, once the song is over he does go back to meditating as many people would think is normal for a monk. But if you really think about it, monks are human beings, despite living by slightly harder rules than many of us are used to, and it’s not all that hard to think that they too enjoy music of differing varieties.

There are quite a few misconceptions concerning Buddhist monks that we’ve been given over the years by the media and by pop culture since anything that is not fully understood is usually taken out of context quite easily and fed to the people in a manner that will make them wonder what is real and in some cases believe what they see on TV or in the movies since they simply don’t know any better. But Buddhist monks aren’t so bound by their ways that they can’t experience life in a number of different ways, so long as it doesn’t firmly contradict their beliefs and doesn’t force them to compromise their way of life in such a radical manner. Think of it this way, living life as you see fit, the way that works for you, isn’t disrupted when you engage in something new, or in something that others might not expect of you, so long as it doesn’t go against anything that you believe in or have come to regard as important to your sense of being. So long as it’s not bound to affect you or your beliefs in a fundamental way, then said interest should be perfectly okay for you to engage in.

To be fair, ‘Enter Sandman’ is a great song and one that doesn’t seek to challenge too many beliefs since the language isn’t horrible, the song is powerful in its own right, and Kossan did actually switch out the prayer that exists within the song with the four great vows of Boddhisatva that are actually sung at Buddhist temples, so he didn’t violate his own beliefs. Obviously, some thought was put into this and as a result, it came out sounding impressive. Some folks might want to state that it was different and not to their liking but to be fair and honest it was a performance worth watching since it was something out of the ordinary and not really something that was bound to be anticipated by a lot of people considering that this isn’t something that a person would immediately think of when it comes to Buddhist monks. Again, that misconception that all of those that follow Buddhist teachings are all about quiet meditation and that they don’t understand the music that other people listen to is kind of funny when one thinks about it since to start with, monks weren’t born into their robes and while some of them might have been taken in at a young age and taught in this manner, there are still plenty that come to Buddhism later on, after they’ve lived a bit and experienced what life has to offer. People come to Buddhism for many reasons, but it’s not uncommon for those that walk this path to experience life first and therefore have a good amount of experience that they can draw from.

Music is also a very unifying force that people discount far too often since like it or not, it can draw people together and help them experience life in a way that is far more unifying than some tend to realize. It doesn’t feel likely that Kossan would have started playing along to death metal, but heavy metal appears to be well within the realm of feasibility. And to be real, he did a pretty good job.