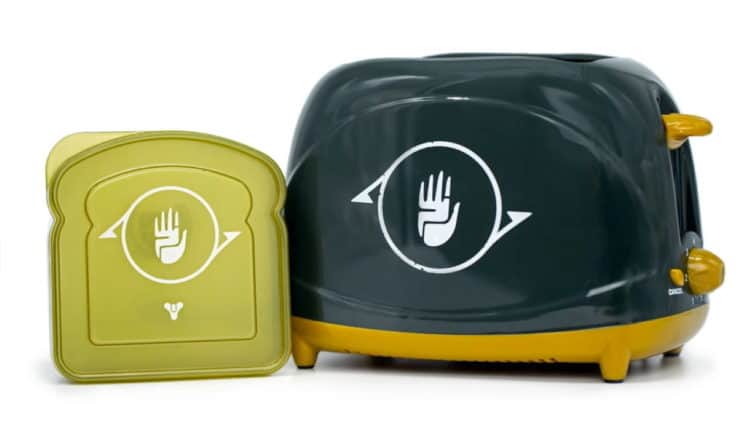 Okay, I admit that was a terrible joke, but I do not apologize! So, what’s with this Destiny Toaster that everyone’s talking about on Twitter? Well, as many of you probably know the classic “let’s get that bread” meme courtesy of dmg04, Community Manager at Bungie, the meme will soon be brought into the physical world and made a reality – a “memeality” – if you will. While it is almost entirely a massive meme, Bungie is actually doing some pretty good stuff with this Destiny Toaster, like donating 10% of profits from sales of the Destiny Toaster directly to St. Jude Children’s Research Hospital, so that’s even more money to help support the amazing people who work to give those children a wonderful time (For the kids!). Aside from that, you’ll also receive a free sandwich holder if you purchase the Destiny Toaster – you can’t go wrong with free stuff! The second most important thing that you will also receive if you pre-order the Destiny Toaster is a free Destiny 2 in-game emblem called “Burnt Edges” which is quite literally a burnt piece of toast and it’s my new favorite emblem in the game.

What’s Wrong With That?

So, you may be asking yourself now: “What’s wrong with that? That seems like a perfectly fun and light-hearted item to purchase to help support charity and help bring memes into reality!” Well, the problem for many comes at the price. The Destiny Toaster is priced at $84.99 and after taxes and shipping, it’ll cost you just over $100. The issue with this price is that many see the Destiny Toaster as nothing more than a plastic toaster that can be bought at a store for anywhere from $20-30, and doesn’t even cook the toast evenly. While I can see this as an issue for some people who maybe don’t have the cash just laying around to buy a toaster that seems a bit impractical, my solution for those is just…don’t buy it? Absolutely nobody is telling you that you have to buy it. The other glaring issue for a lot of people is that the original toaster meme came from the fact that many players thought that the Exotic Fusion Rifle “Jotunn” looked like a toaster, hence why so many people wanted a Jottun toaster. Unfortunately, the final product did not end up being a Jotunn toaster, but dmg posted on Reddit to clarify why this is the case: “We saw a bunch of pretty cool [concepts] from players, but the realities of production/manufacturing would have made it nearly impossible to execute…In any case, excited that we got this out. Toaster is fun, emblem is sick, and we’re helping to raise more money for kids in need. Future initiatives can grow and learn from this, so we’ll see where the road takes us!” Yeah, I absolutely understand that making an actual Jotunn toaster would have been just about impossible, but it would have been wicked cool if it was possible. I’ve seen a lot of people saying that if we can’t get a Jotunn toaster, then we should get a Jotunn ornament that looks like the Destiny Toaster, and honestly I think that would be absolutely incredible.

So, is the Destiny Toaster worth it? Well, do I think the actual toaster is worth upwards of $100? Absolutely not. Do I think that it’s a fantastic way to raise money for the kids and support artists that spent the time to create the toaster and other employees at Bungie? Absolutely! Did I spend $106 solely for the emblem? Of course, I did – what did you really expect? It’s a great emblem! The Destiny Toaster is set to ship from December 2021 to January 2022, so I guess we’ll revisit this when it arrives. Until then….stay toasty, Guardians!