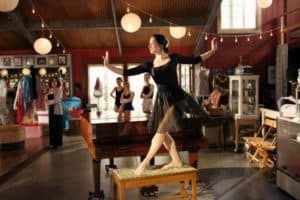 Michelle and Fanny are in desperate need of money to keep the academy up and running and they have no idea what to do with all the land they have. With them not charging most of theirÂ students and closing theÂ studio constantly, including when Michelle left town on the BunheadsÂ summer finale,Â there has to be a way to wring money out of their capital. After a meeting with their accountant Eric, who they hire and fire during the entire episode, they run into a homemade candleÂ shop on theÂ side of the roadÂ – a road that happened to be on their property. For 10 years, he had been operating a business on the property, paying forward to the alpaca guy, and the encounter with Fanny and Michelle leads them to come up with the idea of building an amphitheater. It wouldÂ save them money on renting out places to put on their performances and they could bring all types of cultural acts to town and charge an entrance fee.

They head back to the accountant’s office to tell Eric to good news, but he brings them back down to earth almost immediately. They can’t get a loan (and especially not in the three weeks they have until their next big performance) because they don’t have money, a business plan, or a line of credit, all three very important inÂ starting up a business. While MichelleÂ signs up for a junior college business class,Â she finds out thatÂ she never completed highÂ school; one summerÂ courseÂ shy,Â she opted to go to Dollywood for two weeks and forgot to take the class entirely. ThisÂ shakes her confidence for Trivia Night at The Oyster Bar andÂ she has a bad result withÂ Sam, as well as an unintentionally gruff first encounter with Godot, back from his time in Australia.

She brings the theater idea to “former actress” Milly, who actually loves it and butts in to become a partner with Michelle and Fanny. Truly, however, feels likeÂ she’ll be losing Michelle and Fanny to herÂ sister and Michelle manages to talk her down from that notion over a round of celebratory blue alcohol.

Girls, Girls, Girls
Times are tough for the bunheads. For one, Melanie has been letting her temper get the better of her lately, leading to physical incidents with her brother’s ex (who broke up with him for no reason and left him depressed) and Godot (who hurt Michelle’s feelings at the bar).Â She does have a little bit of hope, though, after finding a flier for a roller derby league.

Sasha, meanwhile, will officially be alone the next day, as her mother is leaving for Encino and her father is already gone with his boyfriend. Her room has yet to be packed up and despite the protestation of her mother, it won’t be,Â soÂ Sasha gets left the keys without her mother offering much comfort. Later,Â she goes to Michelle’s and breaks down about her unstable home life.

Finally, Frankie and Cozette are continuing to leave their mark on Paradise. While they’re already the most popular kids inÂ school and able to transcend the cliques,Â Cozette has won over Matisse with her odd facts and personality and Madam Fanny with her dancing andÂ sheer overall talent. Will the bunheads ever be able to adjust to having them around?

Additional thoughts and observations:
-“He’s fired. We hate him.”
-“They’re like two really hot unicorns.”
-“My only weakness is the artsy and the fartsy.”
-I liked Truly’s “gum” control debateÂ story.
-What did you think about the dances tonight?Â Cozette’s was pretty but we’ve had one like that before, while the final dance withÂ Sasha felt like theÂ spiritual partner to her “Istanbul, Constantinople” routine from theÂ summer.
-Godot has a Master’s in Oceanography. I know, right?
-The next big Bunheads production will beÂ Sleeping Beauty. Think they can pull it off?
-No Boo this week. Thoughts?
-Next week on Bunheads: The mid-point of the winterÂ season findsÂ Michelle’s brother Scotty coming to Paradise, Melanie giving roller derby a try, and Boo being overwhelmed by child care.