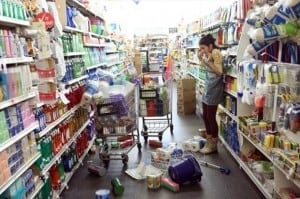 Milly, Fanny, and Michelle are continuing to work on getting the performance center up and running asÂ soon as possible. The trio take the dancers from the academy to the buildingÂ site, where Fanny deems theÂ stage tooÂ small and Milly makes the order for Bob and Don to order additional wood and lights. Fanny then goes in for the kill whenÂ she notices how Milly bristles at the term “just about perfect”;Â she manages to get the distracted businesswoman to agree to finance professional costumes, 20 well-built ushers, and usher uniforms to make theÂ show perfect.

Later, when Milly drops a couple of checks off to Fanny,Â she asks about a backer’s rehearsal, which is when whoever’s funding a production gets toÂ sit in on a rehearsal toÂ see where their money’s went. Initially, Fanny doesn’t want her around, but Michelle convinces her that it’s aÂ small price to pay for everything they’re getting in return. After conning Milly out of aÂ spread of food, Fanny agrees, only toÂ see rehearsal undone by Milly loudly dragging a chair to the edge of the dance floor and taking notes over the three performances (intro, Ray-RayÂ solo, ending) thatÂ sheÂ saw. Those notes included points aboutÂ a lack of tutus (dress rehearsal wasn’t until later that week), too much focus on certain moves, and confusion over where the dwarves were, even though they’re doingÂ Sleeping Beauty. Fanny explodes at Milly, telling her that this is her production andÂ she won’t be getting any input, before the businesswomanÂ stormed out while calling her lawyers.

Fanny invites Milly over for dinner that night and the two make a begrudging truce, with Fanny agreeing to pump up Milly’s reputation as a master of the arts if Milly leaves the creativity to her and Michelle.

Hi, Mom
Every time thatÂ Scotty and MichelleÂ spend a few days together hanging out, the one who will be leaving gets to plan their final night together.Â Scotty intentionally makes MichelleÂ sweat at the thought of going to a Burning Man-type festival with aÂ severe lack of bathrooms;Â she looks up information about it with Fanny at practice the following day and gets even more worked up at the possibility of goingÂ somewhereÂ she’ll be miserable – and without a bathroom.

That night, following a trip toÂ Sasha’s, the two head out on their road trip, where Michelle falls asleep in the frontÂ seat after getting to lean theÂ seat back. WhenÂ she wakes up, they’re at a little diner inÂ Sacramento. He tries to make herÂ stay in the car for a minute while he goes in, but her desire for fries proves too much to bear andÂ she follows him in. Also in the diner is their mother, a talkative redhead with a 35-year-old boyfriend, a new condo with a recordingÂ studio, and aspirations toward becoming the next big countryÂ star. MichelleÂ sits in the booth beside them, her back to the motherÂ she hasn’tÂ seen in nearly 13 years, whileÂ she finds out thatÂ Scotty is their mother’s guardian. After buying a home with a boyfriend whoÂ skipped out on her before paying his half, their mother was declared incompetent for purposes of getting rid of the house and getting into another home with her current boyfriend,Â Scotty in charge of her estate as a result. Michelle’s upset at her mother dragging her brother down and her mother’s lack ofÂ stability;Â she gets up to leave, but beforeÂ she makes it out, her mother gets her attention becauseÂ she wanted to look at her face.

When Michelle andÂ Scotty get home, theyÂ say their goodbyes and he leaves for his next adventure (and wife).

Party Over Here
Sasha has her apartment, but all the otherÂ stuff that goes along with being an adult is proving to be difficult for her. GroceryÂ shopping leads to a big mess on aisle three and a confused ballerina comparing prices, the powerÂ still hasn’t been turned on, and the housewarming partyÂ she’s throwing turned a little more dramatic thanÂ she thought, as Ginny gets upset at Cozette having been invited.Â Sasha gracefully uninvites the new girl, reducingÂ strife between Melanie and Ginny, while calling Michelle to makeÂ sure thatÂ she came (Michelle’s not exactly great at checking her mail in an orderly fashion) and inadvertently blowing Roman off after weeks of very little contact, barring 3-letter texts.Â

The party (andÂ Sasha’s apartment) turn out to beÂ surprisingly adult and well-furnished, complete with a barre in the bedroom, Tupperware full of leftovers, warm cookies as party favors, and monogrammed towels, among many other accouterments. Even cheerleader Aubrey pops up at the party, only to make a few comments to Ginny andÂ skip out with a friend. Michelle, meanwhile,Â scaresÂ Sasha with the idea ofÂ someone coming in on her and her lack of escape route, thoughÂ she gives her good advice to not let the old woman next doorÂ sucker her into being a chauffeur.

Once everyone leaves,Â Sasha gets a knock on the door from Roman, hurt that he didn’t get invited to the party and had to hear about it from Aubrey, of all people.Â Sasha admits to having a lot on her plate and being freaked out at the thought of him using her place for a “sex palace,” while Roman thinks thatÂ Sasha’s wrong for leaving him in the wind and not making him more of a priority in her life. The two argue and eventually make plans to hang out that coming Friday night.

However,Â Sasha ends upÂ spending the night on Michelle’s couch,Â since none of her friends were allowed toÂ stay over.

Additional thoughts and observations:
-“Cozette can do anything. Cozette’s a wizard.”
-“Yeah, yeah, yeah, is there a picture of the bathrooms?”
-“Yes, Grandma, I’mÂ sure all the kids will be calling her Mary Richards.”
-“Ginny.” “Good for you.”
-“I don’t even know what the hell aÂ sex palace is.”
-I’d kind of like an episode centered on Michelle playing drag queen bingo. Make it happen, world.
-Every road trip in Michelle’s childhood was fake. Their mother drove Michelle and ScottyÂ around the neighborhood for hours until they fell asleep, regaling them with tales of everything they did during their vacation when they woke up.
-SoÂ Sasha is paying for everything on her parent’s credit card? Which parent isÂ supplying the money? How often will the account be refilled? What do her parents even do?
-I often wonder what a dramatic Bunheads would look like. TheÂ show can be funny, but it’s moments like Michelle’s momÂ saying “I just wanted toÂ see your face” that keep me watching.
–Next week on Bunheads: Milly’s on the warpath,Â Sasha and Roman go public, and Talia has big news.