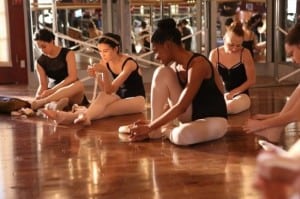 Paradise hasÂ seemed like exactly that for much of Bunheads. TheÂ sleepy coastal California town isÂ seemingly held within a bubble where nothing bad can ever get in and the air is constantly filled with witty pop culture references, which made it the ideal place for Michelle toÂ start her life over again after leaving Vegas and losing Hubbell. Paradise provides the type of protection that the formerÂ showgirl never had before and has allowed her to get in touch with her love for performing, but what if it all were to go away? What if there was no Paradise?

On the penultimate episode of thisÂ season of Bunheads, there’s a fire heading toward town and the danceÂ studio is one of two evacuation centers. If that wasn’t enough, Michelle has been named one of the “center captains,” meaning thatÂ she’s in charge of the welfare of half the town thatÂ stillÂ struggles to accept her. It’s often aÂ struggle for her to keep order in herÂ small dance classes,Â so having to become the authority figure to more than just a gaggle of pre-teen/teenage girls will be a major test for how far Michelle’s come in her time in Paradise. Fanny not being around provides her with an opportunity to take charge andÂ show whatÂ she can do, but the only question is: willÂ she do it?

Elsewhere on Bunheads, Talia is preparing for her quickie wedding to Rick and decides on her maid of honor, whileÂ Sasha’s apartment has a break-in, Melanie’s beingÂ stalked, Boo’s caught in an unintentional triangle, and Ginny’s eyes can’tÂ seem to leave Frankie.

Bunheads airs Mondays at 9:00 on ABC Family. You can check out a recap of the most recent episode here.

How will Michelle handle being in charge of half the residents of Paradise at theÂ shelter? Will Talia’s wedding and decision to hang up her dancingÂ shoes have an impact on Michelle’s career direction? DoesÂ Sasha’s reaction to the break-in mean thatÂ she trusts Roman?