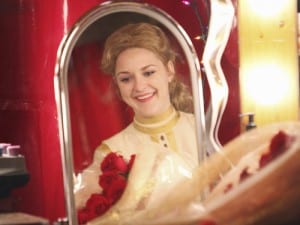 AllÂ summer long, I’ve been holding on to the hope that Bunheads could fulfill its potential. ThoughÂ showing moments of pure brilliance and having multiple fantastic performances, theÂ show could never put it all together for an extended amount of time and live up to the promise of its unique premise. But a great finale could change that – a great finale can give you the inclination that aÂ show has fixed whatever problems it may have had inÂ season and will hit the ground running once it returns from hiatus. A great finale can wipe away theÂ sour taste of an otherwise lackingÂ season and give aÂ show the type of momentum needed to make a creative jump on a more permanent basis. Unfortunately, in the case of Bunheads, its finale was more than a bit underwhelming.

The brightÂ spots ended up being a bit moreÂ scarce than I expected in “A Nutcracker in Paradise”, but they were there and kept the whole Bunheads train from veering off the tracks too much.Â Sasha meeting a potential love interest in former jock (turned goth)Â  Roman may be just the thingÂ she needs to tone done the nastiness and become more of a consistently bearable presence. Her home life isn’t great and her ballet life isn’t much better, having gotten replaced by The Ringer for a night,Â so the girl needsÂ some type of positive influence in her life orÂ she’ll explode into a cloud of blue hair extensions and cyanide.Â She needs to feel loved, to feel needed and hopefully, Roman gives herÂ someone to identify with and lean on when her limitedÂ supportÂ system isn’t there. The quick turn around in his personality might be a little much, undergoing a total makeover of both appearance and interests in theÂ span of 20 minutes, but it kind of fit perfectly withÂ Sasha.Â She’s impulsive and just underwent aÂ similar makeover during her acting out,Â so theyÂ seem to be on aÂ similar wavelength and could understand one another in a way that others can’t.

In addition to one bunhead possibly havingÂ something to dull the anger that has built up inside, “A Nutcracker in Paradise” hadÂ some pretty dynamic dance routinesÂ spread throughout. Though I liked all the rehearsal footage that we got (and hope that the winterÂ season brings more like it), Boo and Carl’s ultra-cheesy but oddly fitting “The Rainbow Connection” at the Oyster Bar, and the opening to The Nutcracker, Michelle’s pre-dreamÂ sequence dance was beyond gorgeous. Anytime they letÂ Sutton Foster go into her performing element, the results have been grand and this was no different. It wasÂ sexy, it wasÂ strong, it allowed her toÂ show off a prettyÂ singing voice and a little bit of attitude thatÂ she doesn’t get to pull out as Michelle. And it led into the dream, where Hubbell made an appearance and hinted around at the currentÂ status of his former bride’sÂ time in Paradise. Bunheads going a little moreÂ surreal felt like a fairly logicalÂ step,Â since theÂ show is already not that concerned with realism, and theÂ step forward paid off; Michelle got to literally confront the ghost that’s been haunting her for the pastÂ several months in an emotional cameo thatÂ seemed to point her to a new career direction. Michelle and Hubbell had enormous amounts of untapped chemistry and even if for a brief moment, we got toÂ see them reunite.

While the finale allowed Michelle to perform her heart out before having toÂ seek answers from aÂ specter of her past, itÂ sent whatever progressÂ she made in the first half of the episode into the crapper onceÂ she accidentally maced the dancers backstage during The Nutcracker. For 10 episodes, we’ve had Michelle 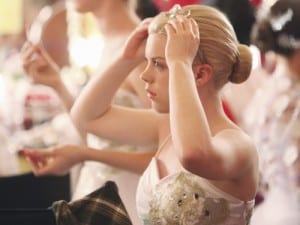 trying to put it together, to be able to find her post-performingÂ niche and win the approval of her former mother-in-law turned employer/co-partner. I admire her guile and her willingness to keep trying afterÂ so many defeats, but it was nice to have people acknowledging that Michelle wasn’t actually the Black Death in the form of a lovely brunette. It felt earned, it felt like the character had finally made a little personal progress and her relationship with Fanny had outlasted theirÂ stormy, awkward initial interactions. But once the accident happened (on top of her prior good-intentioned relationship meddling with Fanny and Boo/Ginny unraveling, resulting in the latter continuing fighting and the prior breaking up with her boyfriend),Â it all went to hell and Michelle became the pariah once more, to the frustration of no one more than me. As I’ve reiterated, I’ve come to terms with the Bunheads pacing and though I’d like toÂ see more growth on a weekly basis, there being any growth at all is a victory and cause forÂ satisfaction. The thing is, though, what’s changed for the betterÂ since the pilot? Fanny wants nothing to do with Michelle, the town of Paradise wants nothing to do with Michelle, and the bunheads have only had her as their teacher for a couple of episodes,Â so it’s not like her dance expertise has come in handy with the girls.

Which is why I wasn’t that enthralled by the ending, Dead PoetsÂ Society reference and all. For one, I don’t know (m)any teenage girls that are able to re-enact Robin Williams movies at the thematically appropriate time, but mostly, you know and I know that Michelle won’t be leaving Paradise for good. Maybe temporarily, but there’s noÂ show without Michelle, no fish-out-of-water dynamic for Bunheads to explore. Therefore, the ending didn’t have nearly the impact that it probablyÂ should have had; there are absolutely noÂ stakes here. Michelle will return to teaching at theÂ studio within the first couple of episodes of the winterÂ season, if not the premiere, and the ending ofÂ “A Nutcracker in Paradise” will have been, ultimately, for naught. The only positive that came from the walk-out at the end of the finale was that the girls (literally)Â stood up for Michelle, which could mean deeper, more personal at theÂ studio once everything returns to normal. Michelle might be a clumsy, flighty busybody that causes an entire town to facepalm at theÂ same time, but her mere presence in theÂ studio has aided the girls. The formerÂ showgirl is not only more of a contemporary than Fanny and has had a career more recent, thus being more prepared to help them take the next bigÂ step,Â she’s tried to be their friend. Michelle’s extended herself through dinner invitations and boy advice,Â so this indicates that though her time at the FlowersÂ studio might have been brief, the girls are with her.

The past couple of weeks have found BunheadsÂ stumbling a bit from its heights earlier in theÂ season, the comedy becoming a little bit tooÂ screwball-y and the drama not quite forming intoÂ something compelling. IÂ still think, even after all the poor moments, that theÂ show could beÂ somethingÂ special, but it’s not quite there yet. Every episode has had powerful moments or truly beautiful lines of dialogue, but every episode has also had itsÂ share of the cringe-y, the unearned, and the irritating. If theÂ show is able to gain a little more focus, accelerate the plot, and dial back on the forced quirk by a few hundred notches, this might turn into a greatÂ show. Not a greatÂ show for ABC Family, not a great teen drama – a greatÂ show, period. It’s there for the taking, but can Bunheads perform when it matters most?

Thoughts, Quotes, & Observations:
-“Which one of you is going to be Heath Ledger?” I’m normally not one to laugh at Brokeback Mountain jokes, particularly in 2012, but I couldn’t help but giggle at this.
-Sasha, ending her explanation of all the boy drama: “…and me, I wish we were all lesbians.”
-“You’re like an X-rated Mary Poppins.”
-I hope that they bring The Ringer back and never reveal her name. Her brand of insanity (“have you ever put ground glass…?”)Â was entertaining, particularlyÂ since it gotÂ Sasha on her toes.
-Michelle and Godot – kissing but that’s it. Please be it.
-Melanie is kind of a ****, right? I didn’t mind the drama between her and Ginny, though, only because it madeÂ sense. Ginny has the emotional maturity of aÂ second grader, thanks to her relationship and fear of growth, and that made her anxiety manifest into what it did tonight.
-Here’s a recent interview thatÂ Salon did withÂ Sutton Foster, which covered her decision to get into TV, her thoughts on her character, and her love for Gilmore Girls.
-If you guys want to talk about the finale and theÂ summerÂ season as a whole, you can check out the TVOvermind Bunheads discussion forum. I’d love to hear your thoughts.
-Well, that’s it for Bunheads until early 2013, when it’ll be returning for the back order it received. Thank you guys for reading andÂ sharing my reviews of theÂ summerÂ season and I hope you’ll join me in January to continue talking about theÂ strange journey of Michelle, Fanny, and the four little bunheads from Paradise.