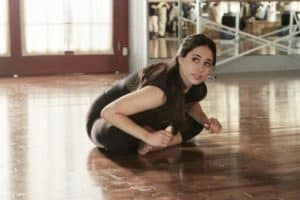 SashaÂ has continued toÂ sneak around andÂ see Roman once everyone goes home from practice, even after Michelle catches her in the act. EverÂ sinceÂ Sasha got home from Joffrey a week (orÂ so) before the BunheadsÂ season picked up,Â she’s been afraid to go to her house for fear of dealing with her parents and, in many ways, theÂ studio has offered her a refuge. However, when Michelle breaks a date with Marion, a friend of Talia’s boyfriend TaliaÂ set her up with,Â she comes by theÂ studio to discoverÂ Sasha waiting for Roman. After getting her to explain why exactlyÂ she won’t go home (her house is a disaster), there’s a knock on the door. It’s not Roman butÂ Sasha’s mother, confronting her daughter about the lack of contact and then telling her thatÂ she’s divorcing her husband. He’s moving toÂ San Jose to be with his (male)Â significant other, whileÂ she’s dumping the house and moving back to Los Angeles, which leavesÂ Sasha with a choice. DoesÂ she move away from her friends, herÂ school, and her dance academy or doesÂ she find a place to live and a way to make a life in Paradise work for her?

Will You Marry Me?
Carl is coming home from anotherÂ summer at camp, which makes Boo incredibly nervous. He’ll be arriving early, leaving no time for her to get a manicure, detonate the bath bombÂ she bought, pick out a dress,Â or figure out how to do her hair. AsÂ she’s leaving practice to go home and hurry a look up,Â she runs into Carl at theÂ studio; he caught an early train home and wants a hug, but due to howÂ sweatyÂ she is,Â she convinces him to give her a quick peck in exchange for more later, onceÂ she’s clean. After confirming that they’re going to meet one another’s parents on twoÂ separate dinner dates, he gives her a hand-crafted bow-and-arrowÂ set he made her at camp and the two part.

Later, at the Oyster Bar, Boo asks for advice from Michelle, who, upon finding out that Boo can’t bail, tells her to not be herself, to be the Boo thatÂ she thinks Carl’s mom wants her to be. Oh, and to set a timer for 90 minutes and high tail it out of there when it goes off,Â since things like thisÂ tend to go bad around that mark.Â Turns out, that was the worst adviceÂ she could have given. It makes Boo even more nervous andÂ she waffles on every question from Carl’s motherÂ Sweetie, looking like a hopeless flake in the process. However, Boo hears Carl tell his mother that Boo is the one he likes and that he could marry her onceÂ she gets up from the table.

When it comes time to meet Boo’s parents, things are a mess but for a different reason than they were with the Cramer family. Her brother has friends over and they’re all raising hell, her mother can’t get the paella to turn the right color, her father would rather be anywhere but there, and to top it off, there are the requisite embarrassingÂ stories from both her parents. You can’t necessarily blame them, as Boo had never brought a boy home, though after her brother performs for them while they eat a dessert Carl made (Banana Foster),Â she has to let it out.Â She accepts Carl’s “marriage proposal” andÂ spouts off a fairly detailed plotting of their life together, which would be based in New York and feature college and dance companies, until he lets her know thatÂ she took what heÂ said incorrectly. He had to be a little hyperbolic to get his mother to listen to him and while he cares a lot for Boo, marriage isn’t on the table.

At least, not until his final year ofÂ summer camp.

Truly, Madly, Deeply
Truly is having problems with her landlord and has to temporarily moveÂ the goods from herÂ store into Michelle’s home.Â She doesn’t have a lease and hasn’t been paying the landlady for quite a while due to an outrageous rent hike (40%) thatÂ she couldn’t afford; with no appointment available until March,Â she has to figure out a way to come up with an extra $1200 a month to get herÂ shop back, but in the meantime,Â she takes advantage of having a place toÂ show the clothes. That includes having Jill, a valued customer, a preview of her fall line while Michelle made coffee and hosting a fall open house that turned into a fairly active party.

Truly’s landlord turns out to be herÂ sister Milly, aÂ stone-faced businesswoman who doesn’t like Truly due to problems both personal (broken ABBA CDs!) and romantic (Truly “stole” Hubbell from her). However, through Michelle’s convincing,Â she agrees to let off a little bit on herÂ sister.

New Kids
There are two new kids inÂ school and they’re intimidating the girls. First, there’s Cozette, a beautiful dark-haired girl who canÂ speak at least five foreign languages (including Urdu), drinks wine from a picnic basket, and changes her clothes mid-twirl. Then, there’s her brother Frankie, who drives aÂ scooter, plays the piano, and is more than proficient in martial arts and mechanics. The two are extraordinarily talented and have become the most popular kids inÂ school in two days; if that wasn’t enough, Frankie flirted with Ginny onceÂ she tried to get information from him (drawing her a picture of Ludwig’s Castle in Bavaria, where he and hisÂ sister lived before moving to Paradise) andÂ Cozette is aÂ superior dancer who has raised the bar for everyone at the Paradise Dance Academy. Can the girls keep up?

Additional thoughts and observations:
-“Is Marion being attacked by a giant moth?”
-“Do you not think it’sÂ strange that Katniss just ran by?”
-“Yes, Nancy, you’re aÂ six! Accept it!”
-If you’re wondering about the title, it’s what CarlÂ says to Boo afterÂ she mentions thatÂ she watched Magic Mike twice during theÂ summer.
-I won’t lie, I’m kind of disappointed that we didn’t get to meet Marion, but I have a feeling that the real thing wouldn’t compare to the photo.
-Again, great use of routines, both in the opening tap number andÂ Cozette’sÂ stunning performance near the end of the episode. One was fun and energetic, the other felt like the arrival of a threat to the girls’ prominence in Madam Fanny’s heart.
-Melanie’s not a big fan of reading and fell behind on herÂ summer list. Another character trait!
-I was a littleÂ shocked that Matisse made whatÂ sounded like a pubic hair comment butÂ she was talking about legÂ shaving. This time.
-Alex Borstein! Liza Weil!
-I think they’ve toned Truly down well.Â She’sÂ still aÂ space case with a lot of nerves and noÂ socialÂ skills, butÂ she’s felt like a real person the last two episodes. And of course,Â Stacey Oristano kills it consistently.
-I didn’t like Boo’s plot (too reliant on people not talking to one another/aÂ silly misunderstanding), but anything that gives me more Carl is lovely. And the 8th grade virginity pact being brought up was cute and aÂ small detail that deepened the friendship of the girls.
-Quick – name any of the girls’ parents first names. I couldn’t until tonight when they revealed Boo’s dad is named Rusty.
-Next week on Bunheads: Michelle and Fanny try toÂ scrounge up money for theÂ studio, the girls continue to be mystified by Cozette and Frankie, andÂ Sasha deals with the potential move.