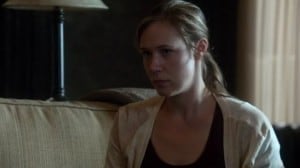 Paris Geller is heading to Paradise…at least for one episode.

According to TVLine, Gilmore Girls alumÂ Liza Weil will be appearing on an episode of Bunheads this January. Weil, known for her role as Rory Gilmore’s frenemy Paris Geller on the WB/CW dramedy, has been tapped to play Truly’sÂ sister Milly on the January 14th episode of Bunheads;Â Milly and Truly don’t get along, however, which means that there’ll be an extra dose of tension and unease lingering around the Paradise Dance Academy. Truly’s already rather high-strung and brimming with anxiety during most of her time onÂ screen,Â so adding in aÂ sister that doesn’t like her can only make things worse, at least temporarily.

On the other hand, having Milly come in for only one episode might be aÂ sign that the two will be patching things up, at least temporarily. They’re obviously not going to be able to work through decades of issues within what little time Milly will be there, but the episode might get them off on the right foot with enough progress that coming to a truce might become a feasible goal.

In addition to her role on Gilmore Girls, Weil has appeared on the likes ofÂ Scandal, Anyone But Me, and In PlainÂ Sight. The first 10 episodes of Bunheads, all of which aired this pastÂ summer, featured a number of former Gilmore Girls players, including Chris Eigeman,Â Sean Gunn, and Todd Lowe, with Kelly Bishop a member of the main cast.

Bunheads returns for theÂ second half of its firstÂ season on Monday, January 7th at 9:00 following theÂ season premiere ofÂ Switched at Birth. You can check out the entire ABC Family winterÂ schedule here, as well as a review of the BunheadsÂ summer finale here.

Are there any other Gilmore Girls alumni that you’d like toÂ see make the trip to Paradise? What do you hope happens in the remaining episodes of Bunheads‘ firstÂ season? Where do you think Bunheads goes following itsÂ summer finale?