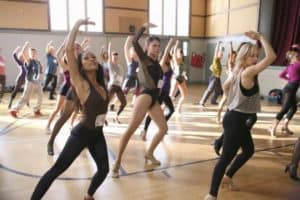 Fanny’s back in town early afterÂ spending two weeks abroad and things are already falling in around her. Not only didÂ she catch Michelle in bed with Godot after their night together,Â she has Michelle’s brother living on her couch for a few days, reminding her thatÂ she needs to find a different place to put her house key. Michelle told him about the key in case he needed to come back in between wives, butÂ she failed to tell Fanny thatÂ she told him or thatÂ she even had a brother,Â so the Flowers home will houseÂ Scotty before changing itsÂ security.

Fanny immediately puts him to work doing odd jobs around the estate, including moving bricks and planting, while returning to theÂ studio, whereÂ she has a (surrealist)Â welcome banner and aÂ sullen Truly to deal with. During the first class back, Michelle joins in with the otherÂ students for a little extra practice and later, uses theÂ studio following the final class of the day to put in a little more work. The reason?Â She has an audition at the Hollywood United Methodist Church onÂ Saturday; it’ll be her first dancing gigÂ since quitting her VegasÂ show in the pilot. OnceÂ she gets the day off from Fanny, Michelle heads off to the open-call audition and checks in beforeÂ settling in with a book. The role is for dancers (who can sing)Â in an adaptation of the 1939 Bette Davis movie Dark Victory, a drama about a hedonistic Long IslandÂ socialite, but whenÂ she makes it inside the crowded gymnasium, it’s clear that the producers have a type in mind.

Fortunately, MichelleÂ survives the initial culling of the herd, the dancing cut that followed a quick routine teach, and a more focused dance cut thatÂ saw her outlast all but one of her group of 10. One final hurdleÂ stood in front of her:Â singing. The piano playerÂ steers her away from doing another rendition of “I Dreamed a Dream” andÂ suggestsÂ she performs “If My Friends CouldÂ See Me Now” fromÂ Sweet Charity, a cute, quirky number that allows her to act out theÂ song likeÂ sheÂ showed Ginny last week. Michelle does quite well, although the producers aren’t exactly enthralled; the friendly piano player informs her why. This audition? Not really an audition. The roleÂ she performed for has already been filled – weeks ago. By theÂ same dancers who the producers continually hire, no less. What they put on today was union-mandated andÂ she never had a chance to get the role.

Let’s Talk AboutÂ Sex, Baby
Melanie, Boo, and Ginny are allÂ spending the night atÂ Sasha’s apartment where they’re talking about Roman and Carl’s lists of intimate encounters.Â Sasha had forced the both of them to produce a roster of experiences they’ve had and while Carl only gave her a graphic novel, Roman handed her a truthful list, one that apparently intimidated her enough to make her think about havingÂ sex with him to keep his attention. Her attempt to talk Boo into losing her virginity to Carl proves to be lessÂ successful, although bringing up theÂ subjectÂ sends the girlsÂ scrambling for all the information aboutÂ sex that they can find. Out come theÂ self-help books like “Our Bodies, OurÂ Selves” and everybody turns into an insecure wreck.

To help with that,Â SashaÂ schedules an appointment to talk to Michelle about the mechanics of carnal relations, though before they can have the talk,Â Sasha and the girls follow her to the audition. Mostly, they watch from theÂ sidelines and hold their breath for their friend/mentor/teacher/pseudoÂ bigÂ sister to do well…until Boo forces them all to get out and “audition,” hopeful that this could be her big break into the entertainment industry. It proves not to be and while Boo doesn’t get to become Natalie Portman overnight,Â she doesÂ stand up toÂ Sasha’s bossiness,Â surprising even herself in the process.

Michelle comes back home deflated from the audition and luckily for her,Â she doesn’t have to face dancing for a while. That’s because Fanny, whoÂ she confided in earlier about the possibility of the girls asking her aboutÂ sex, is lecturing the class about matters of the body, complete with visual aids from her midwife friend (and the local produceÂ section.) Michelle can’t take it and heads outside forÂ some air;Â she’s joined by Ginny who confides in her thatÂ she hadÂ sex with Frankie. Last week. And wrote him a thank you note. He doesn’t talk much, he’s not called her, and he might not even know her name, butÂ she couldn’t resist how beautiful he is and let herself give in to temptation. Ginny blames herself for beingÂ stupid about Frankie and Michelle comforts her accordingly.

The FamilyÂ Stone
Sparkles is no more.Â Truly has lost herÂ store and, with it, herÂ sense of direction in life.Â She may have only worked there for eight hours a week, but Truly loved theÂ store and everything that it gave her,Â so nowÂ she’s kind of flailing. WhileÂ she throws herself into working on the costumes at theÂ studio, Fanny quickly has enough and talks hardheaded Milly into helping herÂ sister get back on her feet. Milly calls a meeting at The Oyster BarÂ and makes Truly an offer;Â she can have a recently abandoned building, vacated by one of Milly’s clients,Â toÂ start upÂ Sparkles again. Free of charge, even,Â since they had paid up through the end of the year. Truly happily accepts and theÂ StoneÂ sistersÂ seem to be on the right track to repairing their frayed relationship.

UntilÂ Scotty comes in to deliver a package to Milly from Fanny, prompting both her and Truly to hit on him (and Milly to give him her number.) They might have a chance to be okay again one day, but for now, Milly and Truly are too at odds to have aÂ strong relationship.

Additional thoughts and observations:
-“So, how’s oceanography going?”
-“Ooh, that’s a big banner. Who’s Tranny?”
-“You cheating on your art teacher?”
-“We’ve got potentialÂ spinster buddy comedy written all over our faces.”
-“The tutus hate me.”
-“Natalie Portman was discovered in a pizza place, but I’m cutting back on carbs.”
-“Everyone, name your banana.”
-“Moving on. Lemonade.” might be my new life motto. Thanks, Truly.
-Michelle taking a picture of (shirtless)Â Godot on her phone while heÂ slept: creepy orÂ sweet?
-It was a good Matisse episode, between her tying flowers to the freshlyÂ sanded barres and revealing her banana allergy.
-The fact that theyÂ showed the girls looking into birth control was aÂ small but important moment, a message that’s not preachy and didn’t take away from theÂ story.
-The auditionÂ scenes make me think that theÂ show could have been tremendous had it only focused on Michelle. Finding out that the audition didn’t matter was a gut punch.
-However, her number changed between checking in and auditioning. At first,Â she’s 105 and by the timeÂ she makes it in,Â she’s 103.
-The piano player was fun, no?
-I loved the mention of The Borgias, which youÂ should all be watching.
-Once again, for those of you in the cheapÂ seats, Ginny is the best bunhead. The best.
-Which do you prefer:Â summer Bunheads or winter Bunheads? I go winter, mostly because they fixed a few problems I had during theÂ summer. It’sÂ still not perfect, nor anywhere near it, but moments like Ginny confessing to havingÂ sex with Frankie made watching the winter episodes more than worth it.
-Okay, everybody. Bunheads has yet to be renewed for aÂ secondÂ season,Â so this could very well be theÂ series finale rather than merely the winter finale. Working against it is that there (likely) won’t be aÂ space on theÂ summerÂ schedule for it, thanks to Pretty Little Liars,Â Switched at Birth, and two newÂ series, as well as the fact that it’s the lowest rated drama they have right now. However, they could very well choose to bite the bullet andÂ stay in the AmyÂ Sherman-Palladino business, particularlyÂ since Bunheads gives them a different type of audience and critical cred. It took about two weeks for the last ABC FamilyÂ renewal decisions, where Bunheads prevailed over Jane by Design,Â so news could comeÂ anytime between now and when theirÂ spring programmingÂ starts next month. Cross your fingers, cross your toes, and if this is the last time we meet, always remember to keep on dancin’.