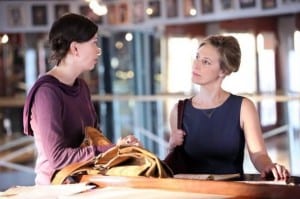 Michelle and Fanny clashed for much of theÂ summerÂ season of Bunheads, with the former bucking on assuming responsibility around the academy and the latter proving to be a difficult personÂ to please, but they did have one thing in common. The two hated to look to other people to help them and would rather be the one to pick themselves up versus leaning on another person in times of turmoil. Having two people like that in charge of, well, anything can make for an unbalanced way of doing business, which is why having Milly involved in the building of the amphitheater is both the best and worst thing that could have happened.

It’s the best because unlike Michelle and Fanny, Milly is a Type-A personality with aÂ strong business mind and even better organizationalÂ skills.Â She can get the finances for the theater together and oversee the things that Fanny and Michelle likely would have avoided, giving them the room to be creative and turn the theater into a valuable asset. However, neither of the two women are used to haveÂ something else around to tell them what to do, how to be, and where they’re going wrong,Â so Milly will provide a lot of pushback that they won’t know how to react to.

On the next episode of Bunheads, though, Milly loses her grip a bit. WhileÂ she might be theÂ savvy businesswoman who could guide Michelle and Fanny out of the doldrums of financial ruin,Â she’s a little to tightly wound and this time, the local town preservationÂ society is theÂ subject of her wrath. They’re arranging a meeting to discuss the construction of the theater and for Milly, that’s a no go. Can Michelle and Fanny get her to calm down enough to go to the meeting andÂ state her case?

Elsewhere on Bunheads,Â Sasha takes anotherÂ step toward adulthood by going public with her relationship with Roman, while Talia brings big news to Michelle.

Bunheads airs Mondays at 9:00 on ABC Family. BeÂ sure to click the arrows above to get a first look at photos from the next episode.

Will Milly be able to keep it together for the meeting and the construction of the amphitheater? AreÂ Sasha and Roman for real or isÂ she merely content in (finally) findingÂ someone who may understand her? What do you think that Talia’s big news will be: a pregnancy?