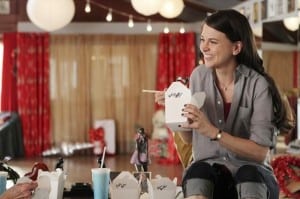 ThoughÂ she wouldn’t have expected it whenÂ she moved to Paradise in the Bunheads pilot, Michelle has grown to love her job at theÂ studio. The thought of teaching once nearly made her physically ill, but after bonding with herÂ students and rediscovering her love for dance through them,Â she became much more comfortable with her role as mentor andÂ surrogate bigÂ sister. However, onceÂ she contemplated a future of never being on stageÂ again, facilitated by Talia hanging up her dancingÂ shoes, Michelle came to theÂ realization that her love of performing isÂ still alive and well.

On the winter finale of Bunheads, Michelle has driven an hour and a half from Paradise to an open-call audition at a Methodist church. The role? A musical adaptation of the 1939 Bette Davis movie Dark Victory, the tale of a hedonistic Long IslandÂ socialite who faces a medical problem. The only thing is thatÂ she didn’t tell anyone thatÂ she was going and the girls run into her on their own day out. Once Michelle came back from her briefÂ stint in Vegas, the likelihood of her leaving again lessened, at least to the bunheads; Fanny forgave her, the parents were okay with having her back, and with her getting back onÂ stage, itÂ seemed like that part of her didn’t need as much attention anymore. But it does and Boo, Ginny, Melanie, andÂ Sasha may have to face losing Michelle to the music one more time.

The winter finale of Bunheads airs Monday at 9:00 on ABC Family. You can check out a recap of the most recent episode here.

Will Michelle get the role in the Dark Victory adaptation? How would Paradise change without her around?Â ShouldÂ Sasha be trying to move this fast with her boyfriend?