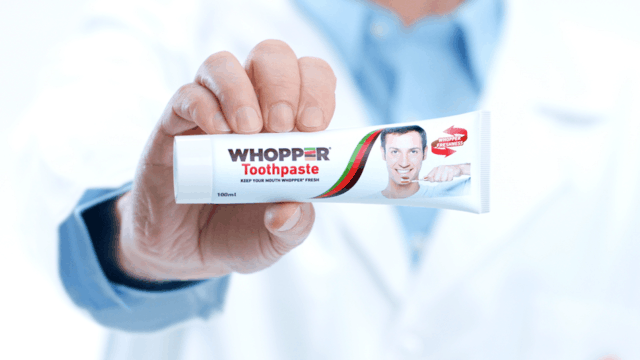 It’s not even April Fool’s day yet and Burger King’s already whipping out jokes for the 1st of the month.Â Â  In a new commercial the fast food giant is teasing the creation of a new toothpaste that tastes like their signature Whopper.Â Â  Apparently the new toothpaste is even dentist recommended.Â  Burger King “teamed up” with agency Buzzman to create “the first toothpaste with active WhopperÂ extracts,” the company’s press release states.

The “product” embodies “the iconic flavor of the Whopper and combine[s] it with active ingredients for optimal teeth and gum hygiene,” according to the release.Â  So in case you were wondering who’s going to try and fool you on April 1st, Burger King is one such culprit.

However, I’m kind of thinking about this.Â  WouldÂ  Whopper tasting toothpaste be that bad?Â  Remember that awesome gum from Willy Wonka and the Chocolate Factory?Â  I don’t know.Â  If I pause for a minute I can actually picture myself brushing my teeth with the taste of Whopper on the bristles.

Sure it seems disgusting but is it?Â  I think people would be afraid to admit that they like this idea.Â  Yup, I’ve decided.Â  I actually want this toothpaste to exist.Â Â  Check out the commercial below: