Burn Notice is back from its week hiatus and it has not lost track of any of the story. But, was this week off worth it or should Michael and his team gone without a break?

First off, Jesse (Coby Bell) has become more of a leading man for the group. With more cases being left to Michael and Fiona, it really allows Jesse to gain his footing. He has really become a good agent, and it really is evident with his interrogation of Kendra (Navi Rawat). The way he has handled things with the class of Michael (Jeffrey Donovan), it shows that maybe Jesse might eventually find out Michael burned him. 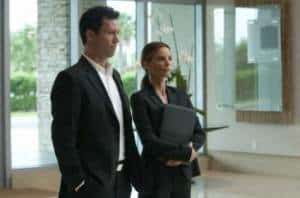 Story wise, the side story felt rushed. The job of helping a bootleg merchant is a fresh idea and the way the plot progressed was great. Like I said however, this story line progressed way too quickly. It seemed to jump from a burning building to quick call to Michael about some information to another burning building. On top of that, the villain of this week Ms. Slippery was caught in such a record time, that it brought down the excitement of the story a tad.

As far as the season story arc, it is shaping up to be good thus far. With the capture of Kendra, we were able to get a few answers, even though it took some time and a self-inflicted injury on Kendra’s part. It would have been nice to get some more from Kendra but it looks like we may have seen the last of her.

Lastly, this episode did an excellent job with its choice of a guest star. Alan Dale (Charles Widmore of LOST), was a great fit for the no nonsense curator. It some way he was channeling Charles while being in character. I am glad to see that actors from Lost are starting to pop up elsewhere.

All in all, this episode was able to tie up Kendras presence and give some lead into a bigger villain for the team. However, this was over shadowed by the fast paced side story and over use of explosions. Let’s hope next week can deliver (it does have Burt Reynolds as a guest star) on being a better episode story wise. B –