Will putting Michael in prison give him the push to tell Jesse the truth or will it make him a more harden person?

First off, Garret Dillahunt is back to play Simon once again. I really love this character and Dillahunt plays him great. The scenes with Simon and Michael (Jeffrey Donovan) are always great. It’s nice to have Simon back. I hope to see him at least finish off this half of the season.

The side story this week was subpar to me. Yes, it involved Michael going to prison, but I didn’t get my hopes up because it was only for a job. The acting of the gang leader was not that good. I cringed at moments where he tried to intimidate Michael. Also, I sensed no real danger for Michael in the prison job. He was an international spy and we are supposed to expect that he won’t be able to hold his own with some prisoners? As for the story, it could have been better. It was a semi bland story that didn’t get me interested until the fight at the end. 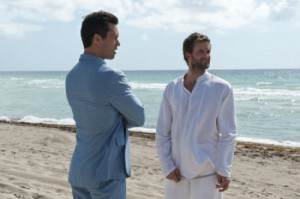 Now the place the episode was great was in the overall season story arc. As I said before, Simon is always great when with Michael and this is no different. I sense that a major battle may be coming from the words exchanged between the two men and I’m patiently waiting for the next episode. With the fall finale only 2 episodes away it will be great to see how the season will develop. The only thing I missed was getting the Bible cipher cracked, but a part of me feels that the Bible will have a huge part if not this half of the season then the next.

With a bland story and a creepy villain, this episode had me split down the middle. I really hope the fall season ends much better. C