This is the moment all Burn Notice fans have waited for this season. Does Jesse kill Michael, doe Barrett kill Michael, or does nobody die at all.

Spoiler Warning: Before I write this review I want to express that this review will contain info that may spoil the episode for those who have not seen it yet. If you wish to get the recap of this episode check out Brittany’s recap here.

I have to say that Robert Patrick was great as John Barrett. He had the sly actions that make him a force to be reckoned with. There are moments that made me cringe with fright as Barrett is such a scary man. I have to say that Barrett (along with Robert Patrick) will go down as the greatest villain/guest star combo second only to Simon (Garret Dillahunt). I am sad to see that it looks as if Barrett did die in the car accident.

As for the episode, I could not have been more anxious for an hour of tv than tonight. Tonight was the night that Jesse and Michael were going to face off. It’s the battle we have been waiting for since Michael burned Jesse and…. well we didn’t get quite that. I have to say I was slightly disapointed by the commercials for this episode than I was the episode itself. While the commercials glorified a face-off between Michael and Jesse, the episode gave us something different.

Instead, the episode in my opinion was split into 3 different parts. We had the week by week case (A lawyers daughter is kidnapped), Michael and Vaughn trying to take down Barrett, and the fight going on between Jesse and Michael’s crew. I really wished the writers would have eliminated the case of the week story line. To me it served no purpose for this monumental episode and in some parts it slowed the main story. 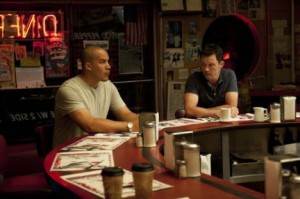 Now the Barret take down and Jesse going after the Burn Notice crew was good but not great. For me, there was not even time spent on Jesse. With him only popping up in about 4 scenes (Only one that had him affecting the outcome of the end), I was unhappy with the way he was teased as being the “main antagonist” for this episode. At least the Barrett story was able to combine with the Jesse story to add some intrgue to the episode, even though it was in the last 10 minutes of the episode. It did do a good job by combining the stories in an explosive way I never saw coming. The scene that really had me reeling was the final moment. As with many shows these days, the finale ends with a great cliffhanger and Burn Notice delivered on one of the best cliffhangers I have seen in awhile.

With a great ending that keeps you guessing and a possible new enemy surfacing (that definitely didn’t look like Jesse grabbing the briefcase) this episode did not live up to all the hype generated by its commercials. B

Now, it’s sad to think that we have to wait all the way till November for the story to pick back up. I see this as a time to practice my spy knowledge learned from Michael and maybe even get my own personal sub marine.