Before I begin I have to say, Holy crap was that an amazing finale. If you are like me you literally were on the edge of your seat the whole episode. These two episodes had everything. Old enemies, huge explosions, and Michael’s Mom being an agent her self. This finale will be one that is remember for quite some time.

Out Of The Fire had to be one of my favorite episodes this season by far (it only comes second to the finale for obvious reasons) for two reaons. For one, this episode had no side story which was great. It was nice to get this episode with a clear goal for Michael and to not have him distracted by an odd job along the way. As a viewer, showing only a main story was a great way to keep my focus on the people who Michael is dealing with. I look forward to many more episodes that forego the normal narative of Burn Notice to spice up the episode.

My second reason for enjoying this episode is the guest stars. Brennen (Jay Karnes) and Larry Sizemore (Tim Matheson) returned this week and were amazing. The way Brennen speaks and handles himself clearly makes 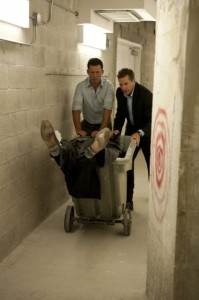 him the sociopath Michael so aptly called him in last weeks Name Card (NC). Being the way he is it’s no wonder Larry calls him a dick. Larry on the other hand is so vastly opposite of Brennen and even Michael in a way. It looked as if Larry wanted to change who he was throughout the episode but it looked as if the change was for evil. His evil hit the tipping point when he killed Brennen. I wish however, that it was the other way around since I enjoyed the antics of Brennen’s speech over Larry’s.

The episode itself was a great lead into the finale. To say the least, Out Of The Fire could have been shown a week before the finale and been more than enough to old me off over a week. A

What can I say about Last Stand other than it was mind blowing? My mind is racing so I figure I should just jump right into the review.

Last Stand jumps off right where Out Of The Fire left off. Michael is thrust into a battle against Vaughn and his goons. We the viewers are shown a side of Michael who beleives that the fight is not worth it. However, a fight ends up taking place. The fight leads to a abandoned Hotel construction site, where Jesse takes a rebar through his leg. For most, this would slow or even end a 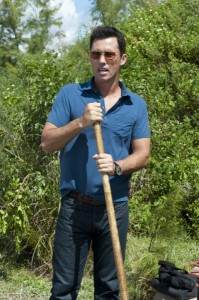 campaign but, this is the Burn Notice crew. They don’t stop for anything but yogurt. A breif stand in the hotel ends with Sam coming to the rescue, with the help from a Congressman and a few dozen army troopers.

Now you think that would be a good ending for a finale. Michael has the burn list, Vaughn is taken away, and everyone is safe for the time being. However, in the cliffhanger twist shown, Michael is in for a suprise. After the battle at the hotel, is is whisked away to a cold land. He is greeeted by an old friend, however no name is given. All Michael gets is a welcome back before being taken into the building in front of him. In a Lost-esque reveal, we are shown that not only is Michael in Washington D.C., but it seems as if he is back in the CIA again.

Now, this episode has edged its way to the top of the list for episodes this season. The fight at the hotel was greatly done. Michael is shown in rare light as even he does not know what to do. Kudos to the writers for giving the viewers a glimpse at a Michael who is scarred for once. It was even nice to see the episode all take place at this hotel as it allowed for less confusion during car chases, and made it easy to identify the villian, Vaughn, who stands outside the entire time.

By only complaint of the episode, nothing major but I have to say it, is the acting of Gabrielle Anwar. I have had trouble with the character of Fiona before but throughout the season she started to grow on me. That change a bit during any emotional scene she had this week. If it were up to me, Fiona should be kept away from any type of emotions that involve crying or sadness on her part. Let’s just keep her as the butt kicking woman she is.

This season has it its ups (Blind Spot, Dead Or Alive) and its downs (Brotherly Love, Neighbordhood Watch) but all in all it was a great season. I could have asked for no greater episode to end the season than Last Stand. A+