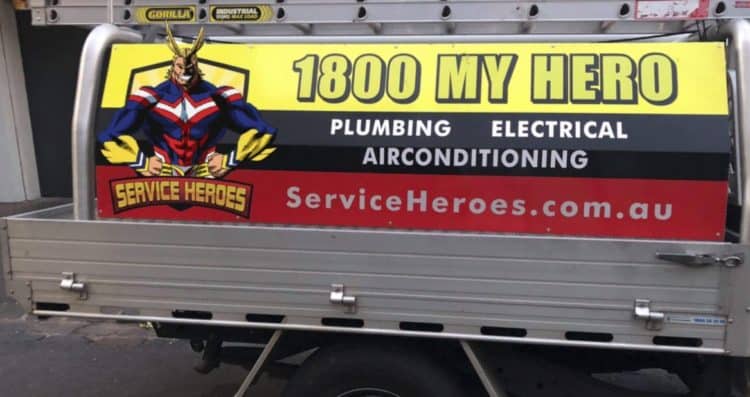 Even if you don’t know about My Hero Academia it’s become one of the most popular series out there today. Kohei Horikoshi’s creation is something that fans have noticed and tends to apper in the strangest of places. In fact you might have seen it and not even noticed it depending on where you’re at. But at this point one business has, after making the decision to use it, is now going viral over the recent My Hero Academia shout out. The good thing is that the image being used for this business is not a direct reference to My Hero Academia so therefore it’s not a big issue, but it is pushing fans into fervor as they are actively waiting for the anime adaptation of My Hero Academia to make its debut this coming October. Fans have been awaiting the fourth season of this series as it’s bound to, hopefully, explain some major cliffhangers from the past season.

The fun thing about My Hero Academia is that it’s based in a world where everyone has superpowers, but the main character doesn’t and has to work around this quirk. Despite that he has aspirations of becoming a superhero and is even accepted into a school for professional heroes. That kind of idea is something that you might be able to get behind since quite honestly it does speak to the average or lesser individual that feels as though they’re the odd person out and therefore aren’t seen as being as valuable as those around them. This kind of hero story is a narrative that, quite honestly, speaks to the author’s idea of their own sense of self at times, but also speaks of the inherent strength that a person can carry that is so much different than anyone else, but is just as forceful in its own right.

In fact it reminds me of an episode of another cartoon character that some of us might recall since we were young enough to recall when he came in and when he finally went out. Darkwing Duck, that ring a bell? There was an episode of the show in which Darkwing Duck somehow found himself transported to a world where everyone was a superhero and as a result the entire world was super-powered. Darkwing, being just a normal duck without powers and just his Batman-like gadgets, was reduced to the hapless innocent that the heroes felt the need to constantly protect from anything and everything. Obviously this didn’t sit well with Darkwing, who was used to being a kind of Shadow-like hero in his own city and didn’t enjoy being relegated to someone that was below average.

The trick of this episode however is that when a villain appeared that, normally, the heroes would defeat easily, the trouble came in the form of a device that rendered any and all super-powered heroes helpless as it was designed specifically for them. Darkwing, not being super-powered, was unaffected and therefore able to defeat the villain with his own brand of justice and without powers. This is one of the most likely comparisons to My Hero Academia it sounds like since the entire world being populated by heroic beings seems like it would be a DC dream come true, okay that was a bad joke. But living in a world where everyone is gifted with powers and the one individual that isn’t is someone that strives to be like everyone else does seem to open the door to many new ideas that might lend themselves to innovative and uniquely-motivated story lines that could be seen as highly popular large because they’re new and unknown.

Obviously this is a series that people have come to enjoy and it’s a series that has hooked enough fans to call it a hit. Putting a likeness on a business that is close enough to being representative of this series is something that could get a business in trouble unless they get permission, but it could be something that also drums up more business since it’s a very bright and positive visual that appeals to many people and gives them the idea that the business is something they can trust since the idea of putting something so bold and so bright on your ad is a sign that you feel completely confident in your business and are ready to back it up. That kind of imagery is something that many people that believe in their business will utilize, but it’s always wise to know the history and the identity of what image you’re using since it can be costly otherwise.

All in all though it’s kind of a cool logo that might work well in Australia but might actually make a lot of people roll their eyes in the US.