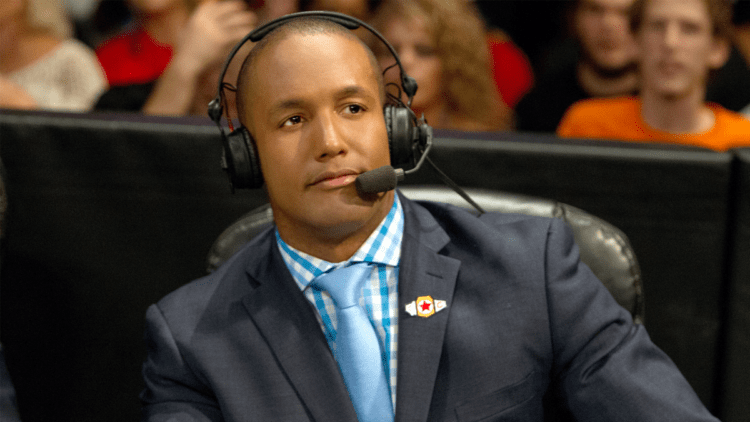 WWE has had its fair share of commentators over the period that it has been active in the pro-wrestling gaming. Byron Saxton happens to be one of them. Saxton has been in the wrestling game for close to a decade now and he has a lot to show for it. From being a professional wrestler to landing on the table as a commentator for the various shows of WWE such as Smackdown and NXT. WWE has without a doubt provided a soft landing for some players who have gone on to find huge stardom. Stars such as John Cena, Dwayne ‘The Rock’ Johnson, and Dave Bautista were the products of shows such as Smackdown and RAW and ended up becoming great actors and creating a niche for themselves in the otherwise flooded market of acting.

Who is Byron Saxton?

Bryan Jesus Kelly was born on August 20th, 1981 in Burke Virginia. He got his upbringing in Burke and spent the later years of his childhood in Orlando Florida. Saxton attended the University of Florida where he worked as a reporter for the college’s magazine. He graduated from the university in 2003. Kelly joined WWE in 2007 and was assigned to Florida Championship Wrestling otherwise known as FCW for training. On his debut on 13th October 2007, he lost to Hade Vansen and subsequently to Sinn Bowdee about a week later. He redeemed himself over the next few months with a win against Vansen with the help of a tag team comprising of Sheamus, Bowdee, Rycklon and Chet Douglas.

Here are 10 things you didn’t know about him:

1. Byron Saxton is not his real name

All wrestlers signed on to World Wrestling Entertainment have to be given a ring name. Saxton’s real name is Bryan Jesus Kelly as mentioned above. In his first 2 matches, he used his real name but decided to adopt the ring name Byron Saxton later on. His other ring names include Michael Cade and Bryan Kelly.

2. He is a journalist

When he was in college, Saxton worked as a reporter and producer for WUFT-FM, WRUF-AM and WUFT-TV. After graduating from college, he worked as an associate producer for Jacksonville’s WJXT Channel 4 News. He was then promoted to work as a traffic reporter on camera for the same station.

3. He has had stints as a manager

In June 2008, Saxton took up management of Black Pain and cut a promo for him. He managed Pain often and even accompanied him to matches and teamed up with him once in a while. He formed a group known as the Saxton Conglomerate which also went by the name Conglomerate that composed of Tyson Tarvers, Stu Sanders among others.

4. He faked an injury

We all have instances where we try to get out of situations by faking sickness or pain. The same goes for Saxton. He made a comeback as a commentator to FCW and wore an arm sling. He claimed to have been injured and therefore said he couldn’t be able to compete in the next game. In an episode that aired on March 4th, 2012, Saxton hit Kenneth Cameron with his arm sling unexpectedly thus prompting a match to be scheduled to settle the score. Once again, when the day of the match arrived, Saxton claimed to be injured and stated that he was unable to compete. He was replaced by Colin Cassady.

5. He was voted off NXT Redemption

Pride comes before a fall. Saxton had had a great run in NXT as he worked alongside Dolph Ziggler who had chosen him to be his rookie. During the season, Saxton attacked his mentor Yoshi Tatsu for costing him a match against Cannon. In late May of 2011, Saxton began calling himself ‘Big League’ Saxton. He believed that he was bigger and better than the NXT rookies. His pride and arrogant behavior caused him to get voted off of that season.

6. He was actually the idea behind the Camella tactic

When Leah Van Dale joined WWE, she was given the ring name Camella, which she thought spoke of an Italian mobster’s wife. According to Sportskeeda, Saxton is the one who actually helped her come to terms with the name and even helped her develop her signature nail-stare gimmick.

7. His Net Worth is Unknown

According to Celebs Trending Now, the 37-year-old is worth a total of $87 million dollars as of 2019 but we don’t believe that AT ALL.Â  Saxton accumulated his wealth from his time working on WWE as a wrestler and commentator.Â  If we had to take a guess he’s probably worth $500,000.

He is the one time USCW Heavyweight Champion. He has also earned the Southern Championship Wrestling (SCW) Florida Tag Team Championship title one time. Pro Wrestling Illustrated has ranked Saxton 223 of the top 500 Wrestlers in the PWI 500 in 2011.

Everything with a beginning has an end. Like other colleagues who left pro wrestling to pursue other interests, Saxton retired from the sport in 2012. His interests however still danced around wrestling only that he assumed a different role. He became a commentator for NXT and RAW and became a ring announcer for NXT. In February 2014, he conducted a backstage interview with Sheamus where he was announced by Michael Cole as the newest announce team member.

Saxton’s career has been one very fruitful one and even though his pro phase ended he found a new deep-seated interest which frankly seemed to have always been there. It looks like Saxton went back to his reporting roots as he got several commentators and ring announcer gigs. It is nice to have a friendly familiar voice blasting through the mic in the form of Saxton. With wrestling being a widely accepted and loved sport, we hope to hear if not see more of him doing what he does best.