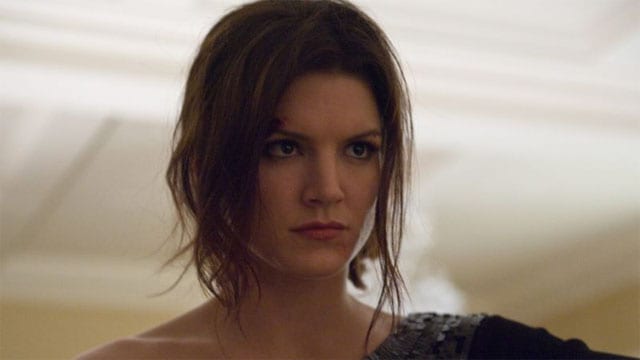 I was very disappointed to hear that Gina Carano would no longer be playing Cara Dune in The Mandalorian. What’s worse is that she won’t be in the upcoming Rangers of the New Republic Disney+ series. Yeah, I’m pretty sure she was going to be one of the chief characters in that series. Hey, why don’t we have Bill Burr’s character take over instead? Then it’ll just be a Star Wars comedy and we’ll laugh our tails off. Okay, maybe not, but in all seriousness, the fanbase is pretty divided on the recent firing of Gina Carano. Some were literally demanding it, while others are now protesting it, but unfortunately, she will now no longer be a part of the Star Wars universe. Just when you thought they couldn’t divide the fanbase any further, huh?

Now I won’t go too much into on how I feel about Gina Carano being fired. Yes, I am disappointed that she’s gone. For the record, I am a fan of Gina Carano and I have been a fan of her career in movies ever since Haywire. Seriously, that movie was awesome. If you want an actress who can play a truly convincing female warrior, cast Gina Carano. I mean, she used to be a professional mixed martial artist for goodness sakes. That’s exactly why she was perfect for the role of Cara Dune. Unlike Mando himself, she wore no helmet, but given Gina Carano’s martial arts background, she managed to make the Cara Dune character look authentic when it came to the fighting. There were no martial artist/stunt doubles needed to make her look like a badass.

I may not fully agree with Gina Carano being fired, but it is done and Lucasfilm has to figure out what to do with the Cara Dune character. Let’s face it, she was a far better character than most of the characters from the sequel trilogy. Yes, that does include Rey. I’ve said this before, but when it comes to Rey, I’ve been fifty/fifty on the character. Unfortunately, the very disappointing Rise of Skywalker reenforced the whole Mary Sue element she suffers from.

Cara Dune, on the other hand, didn’t have that problem. She was a strong character from the beginning who already had a background as a former Rebel shock trooper. This allowed her to go toe-to-toe with Mando and take on villains. I mean, remember that hand-to-hand fight scene she had in that bar? Wow, props to The Mandalorian for making use of Gina Carano’s fighting skills. Not only was she a good fighter, but her origins from Alderaan made her sympathetic and that was her sole motivation for fighting the Empire. Her friendship with Mando led her back to the service of the Republic and gave her a chance to fight the good fight again. Hence, the beginning of Rangers of the Republic.

So it’s unfortunate we’ll never get to see Gina Carano continue the story of Cara Dune, but if she’s gone, does that mean Cara Dune herself has to be written out of Star Wars? The hard truth is not at all. One can argue that Gina Carano was the perfect actress to play Cara Dune. However, Cara Dune was also a good character to have on The Mandalorian and one of the best Star Wars characters created for their shows. Maybe she wasn’t vital for the series, but she was one of Mando’s closest allies and greatly assisted him in both season finales. Plus, she’s just so much fun to watch in action.

Before Lucasfilm fired Gina Carano, I guarantee you they had bigger plans for her for season 3 of The Mandalorian. I mean, she saw Mando’s face for the first time and she didn’t get a chance to talk to him about it. Just seeing that conversation would’ve been interesting to see in season 3, but that might not happen now. And after that interaction with Mando, the two of them would’ve parted ways and Cara Dune would’ve been working as an officer for the New Republic. Eventually, she probably would’ve reunited with Mando again in the season 3 finale to fight more Imps. She also took Grand Moff Gideon as a prisoner, so seeing how that will play out will be vital going forward.

Now even if she wasn’t going to have a big role in season 3 of The Mandalorian, she was likely going to be a chief character in Rangers of the Republic. She was a strong enough character to have a bigger role in another show, so we should see how her story continues. Can that be done without Gina Carano? I believe it can. That means Lucasfilm will have to recast Cara Dune. That does make me sad, but we deserve to see more Cara Dune. Don’t have her be written out, just recast her.

I will admit, that would be challenging to recast the character. Gina Carano just seemed like the perfect choice for that character, but I believe another actress can fill her shoes. So who should it be? The first candidate I had in mind was Ronda Rousey. Talk about her acting all you want, but Gina Carano worked for Cara Dune so well because she was a former mixed martial artist. For all you MMA fans out there, we remember when Ronda was in her highlight years.

Sure, she’s become a more polarizing figure in the MMA world after her transition to WWE, but we have to remember that she became a champion for a reason. In order for Cara Dune to look like a real fight, it would make sense to cast a real-life martial artist. And let’s face it, Ronda has been kicking a lot of butt in her movies.

Now if they don’t want Ronda, then I suggest another popular female action star. My other top candidate would have to be Milla Jovovich. Yeah, she’s the star of those god-awful Resident Evil movies. Talk bad about them all you want, but she is undoubtedly awesome in them. She may not be a former mixed martial artist, but she’s always fully dedicated to her roles. She’s not just awesome in the Resident Evil movies, but check out her other movies. Heck, check out one of her first movies, The Fifth Element. She barely talks in it, but she sure does kick plenty of butt. Milla Jovovich just has plenty of action movie experience to make Cara Dune awesome. And you know what? She’s actually a better actress than both Ronda and Gina Carano. That certainly gives her an advantage.

So what are your thoughts, Star Wars fans? Do you think Cara Dune should be recast? I think she’s too cool of a character to just forget, so I think recasting is the best choice. I will admit, I will miss Gina Carano, so I hope she bounces back from this. Only time will tell.