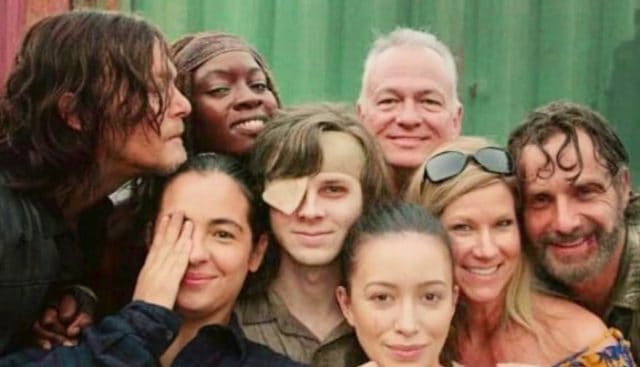 What Carl wrote to Rick in his final letter on The Walking Dead was something that you might figure was sentimental and made to allow his father to understand the kind of legacy that Carl wanted to leave behind. Keep in mind that the young man was raised to fight the walkers and to keep his people safe, but he also decided to go down a path that was much different than that of his father. Carl saw something in people that was more than just the good and the bad, he saw the possibility of something greater than they’d known throughout the last several years, an end to the killing and the conflict that could possibly see them all turn the world back to what it had been before the madness.

Whether Rick and Negan will finally look at what’s been lost and what they stand to gain is still in question, but with two episodes remaining it’s not likely that the resolution is going to be as peaceful as Carl would have liked. His words, written below, describe a world that makes sense, and unfortunately in The Walking Dead this isn’t always that possible.

“I remember my eighth birthday with that giant cake and Aunt Evy showing up on leave, surprising us all. I remember mom, and Codger. I remember school and going to the movies and Friday night pizza and cartoons andnd grandma and grandpa and church, those summer BBQs and the kiddie pool you got me. Could have used that at the prison.

You told me about the walks we’d take when I was three. You holding my hand around the neighborhood, all the way to Ross’ farm. I didn’t know that I remembered them, but I do. Because I see the sun, and the corn, and that cow that walked up to the fence and looked me in the eye. And you told me about all that stuff, but it isn’t just that stuff, it’s how I felt. Holding your hand, I felt happy and special. I felt safe.

I thought growing up was about getting a job and maybe a family, being an adult. But… growing up is making yourself and the people you love safe. As safe as you can, because things happen. They happened before. You were shot before things went bad. Kind of felt like things went bad because you were shot. I want to make you feel safe, dad. I want you to feel just like I felt when you held my hand. Just to feel that way for five minutes. I’d give anything to make you feel that way now.

There are workers in there, dad. They’re just regular people. Old people, young people, families. You don’t want them to die, dad. We’re so close to starting everything over, and we have friends now. It’s that bigger world Jesus talked about. The Kingdom, the Hilltop… there’s got to be more places. More people out there. A chance for everything to change and keep changing. Everyone giving everyone the opportunity to have a life. A real life.

So if they won’t end it, you have to. You have to give them a way out. You have to find peace with Negan. Find a way forward somehow. We don’t have to forget what happened, but you can make it so that it won’t happen again. That nobody has to live this way. That every life is worth something.

Start everything over. Show everyone that they can be safe again without killing. They can feel safe again. That it can go back to being birthdays and school and jobs and even Friday night pizza, somehow. And walks with a dad and a three-year-old holding hands. Make that come back, dad. And go on those walks with Judith. She’ll remember them.

How the next two episodes play out will be the determining factor how things continue onward in The Walking Dead. But it’s almost a surety that you won’t see Negan tending vegetables by the end unless something monumental comes along to change the game.