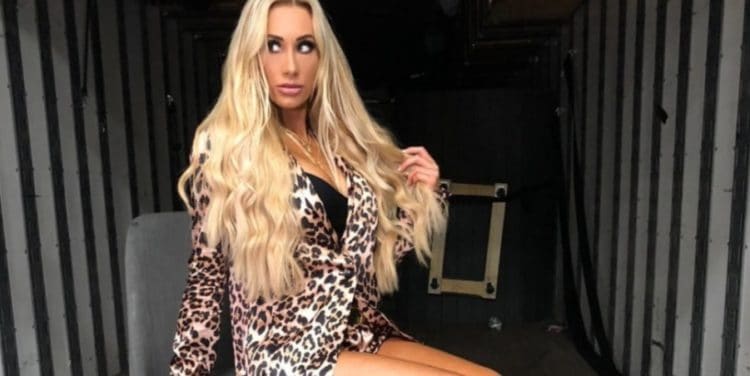 Leah Van Dale was bound to become someone famous it would seem thanks to her father and her career choice since she’s been the type to seek the spotlight more than once in her life. With that in mind the attitude she’s brought to the screen seems to be one that a lot of people either love or hate her for depending on their preference. That’s the landscape of the WWE universe though, and every wrestler that comes through the doors is taught to expect it and feed off of it so as to give the best show possible. Thus far Leah, or Carmella for the sake of this article, has done everything that’s been asked of her and has managed to reach a few very big milestones in her career. She’s actually held the Women’s Championship, has earned the applause she gets, and has thus earned her spot not just on the women’s roster, but in the company as a whole.

Here are a few things about Carmella you might not have known.

10. She has a huge following on social media.

Like a lot of other wrestlers Carmella does have a lot of fans no matter that she’s been kind of a heel for a long time on the show. Since her turn she’s become even more popular as at one time she was kind of an overplayed baddie that didn’t get a lot of action it seemed like.

9. Carmella has been a cheerleader for two different organizations.

She was a cheerleader at one time for the New England Patriots of the NFL and then became a Lakers girl later on. This means that she’s not just a flash in the pan athlete but has done a great deal of training that would eventually allow her to endure the trials that come with being a WWE superstar.

8. She was supposed to be on Tough Enough but decided to pursue a different career path.

Carmella did earn a spot but it was at this time that she’d been accepted as a Laker girl and went on to become a cheerleader for the team. Eventually she would phase out and come back to the WWE without that much difficulty.

7. She’s a certified fitness instructor as well as a personal trainer.

What people need to remember is that the wrestlers of the WWE do have a pretty storied background most of the time. Some of them have been wrestling for years before coming to the show while others have been doing other things that are equally impressive and keep them in great shape.

6. Carmella became involved with Corey Graves after a while.

The WWE announcer is one of those that people either like or hate since his commentary is usually focused on the antagonists and tends to make the kind of excuses for ill behavior that makes him a perfect foil for the rest of the staff. In a way he’s almost like a young version of Jerry Lawler but with more edge and less wrestling background.

5. She’s done her share of modeling in her time.

This shouldn’t come as much of a shock since she’s in great shape and is a very beautiful woman. Leah had her time in front of the camera and it’s fair to say that she could go right back to it if she’s not doing it at this moment.

4. Carmella came in as the manager of Enzo Amore and Big Cass.

As short-lived as their run was, Enzo and Big Cass were kind of amusing and they did pump up the crowd quite a bit, while Carmella was kind of just there tagging along to make them look a little better. Eventually the tag team did implode and they went on their way, but Carmella is still around and doing even better.

Pay inequality still seems to be an issue when it comes the WWE but this kind of figure makes that hard to see when you talk about the discrepancy between men and women. Of course if you really look into where she’s made the most you might find that it’s not all the WWE, though a good chunk of it might be.

2. When she’s not in the gym she enjoys relaxing with a show or movie.

As you can see from her stunning physique Carmella is no stranger to the gym, but she also enjoys just kicking back and enjoying a good show or movie from time to time and picking up a magazine to read through it.

1. She did get accused of being a homewrecker.

Corey Graves’ ex put her on blast all over the internet when Carmella and Corey got together but it would seem that he and his ex were already split when this happened. Damon Martin of SEScoops has more to say on this issue.

She might kind of wobble between heel and face at times but she’s gained a huge following on the show.