I had no idea how much I had missed Castle up until last night when the Season 3 premiere started. And this episode reminded why I love this show so much. It was classic Castle with great scenes, great lines and amazing chemistry between Castle and Beckett.

In case you don’t remember, season 2 ended with Castle leaving for the summer to go to the Hamptons with his ex-wife and publisher Gina, not knowing that Beckett was trying to confess her feelings for him. So he left and Beckett stayed behind, heartbroken and embarrassed.

This season started with a rather unexpected sequence. Castle is in a room full of mirrors with a gun in his hand. There is shouting coming from somewhere outside and he looks panicked, not knowing where to go. A door opens and all the mirrors are shattered – talk about bad luck, right? — and someone starts shooting like crazy. Castle runs towards the door, finds his way outside and comes face to face with Beckett, who tells him to get down on the ground, with her gun pointed at him. He aims his at her and they both shoot. 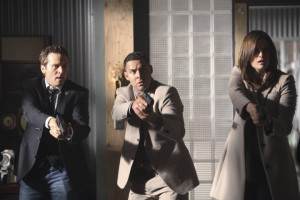 Ryan is trying to balance an egg on its tip because, according to him, it’s the autumn equinox and that’s the only day of the year that you can balance an egg on its tip. He fails to do it obviously and Detective Kate Beckett tells him it’s all bull. He says it’s not because Castle had done it the year before. Kate looks away and doesn’t say anything. They still haven’t heard from Castle. It’s already Fall and he hasn’t returned nor contacted any of them.

They get called in to a crime scene shortly after that. Chloe Whitman, a high school chemistry teacher, has been murdered. She was shot and fell out of her window in the process. When they’re examining the crime scene, Ryan notices an ad about Castle’s new book and a sign saying he will be in the book store that Friday, so he is obviously back in town. Beckett pretends she doesn’t care and tell her partners to stop fighting over their girlfriend. In the victim’s apartment they find a lead: an address. They follow it and when they get to the apartment the address referred to, who do they find but Richard Castle standing over a dead body and with a gun in his hand? Ryan nearly shoots him and calls him a slime bag and Beckett arrests him for murder. 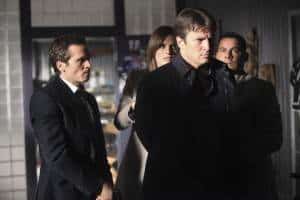 Back at the precinct, Beckett interrogates Castle in one of the greatest ambiguous dialogue on the show.

Beckett: Why didn’t you call?’

Castle: [hesitates] I was going to call you… but then you showed up before I could.

Beckett: Really? Then why did we find you in our victim’s apartment?

Castle: Well, because she called me.

Beckett: Oh, so you and Ms. Santori were in a relationship.

Castle: I wouldn’t say it was a relationship. I bought a few sculptures from her…

Beckett: [interrupts him] Were you sleeping with her?

Castle: How is that relevant?

Castle: Ah… No, I wasn’t sleeping with her.

Beckett: Are you sure? Beautiful woman…

Castle: Is that a new lipstick?

Castle: I’m in a relationship.

Beckett: Really? With whom?

Castle: You know with whom.

Beckett: How should I know? I haven’t seen you in months! You could’ve been in dozens of relationships with women since then.

Beckett: Jealous? Of you dating your second wife and publisher? Tell me, does she make you do everything in a deadline?

Captain Montgomery interrupts their argument and takes Beckett outside to tell her that the bullets found in both victims didn’t match the gun they had found Castle with. Kate releases him and he asks what their next move is. She tells him back off and go home and he can tell she’s pissed off and frustrated so he does what she says for once.